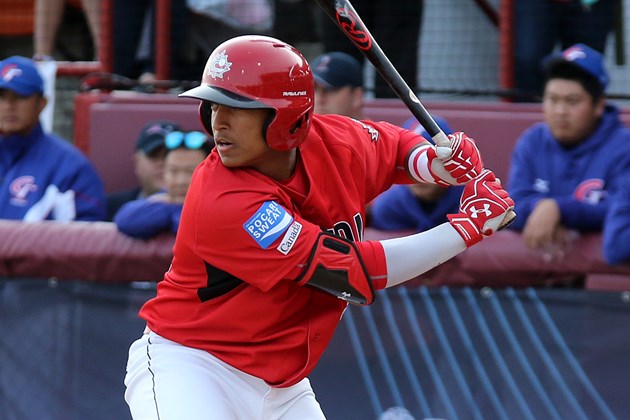 Indians fans will have a new face to keep an eye on, as tonight in the 2018 MLB Draft the team selected catcher Noah Naylor of St. Joan of Arc Catholic High School in Mississaauga, Ontario with the 29th pick in the fist round.

Naylor is 18 years old, and is the younger brother of San Diego Padres first base prospect Josh Naylor.

6’1, 195 pound, Naylor bats left and throws right. One interesting thing to keep an eye on about Naylor is the fact that he did play some third base during the Area Code Games and that was talked about on MLB Network after the pick was made.

The left-handed hitter appeared in 7 games with the Ontario Blue Jays this spring (8-for-26, .421, 2 2B, HR, 6RBI), the elite 18U travel team in Ontario, Canada. He also toured Florida as a member of the Canadian Junior National Team during spring training, including games and at-bats against the Major League staffs of the Boston Red Sox and Toronto Blue Jays.

He participated in the 2017 High School Home Run Derby during the All-Star Game festivities at Marlins Park last July and his older brother, Josh, was the first round pick of the Miami Marlins in 2015 and currently is a top prospect in the San Diego Padres system.

Noah is committed to play at the collegiate level at Texas A & M.

Naylor has all the tools, bloodline, and cold weather. I thought he would be gone by now. Nice pick