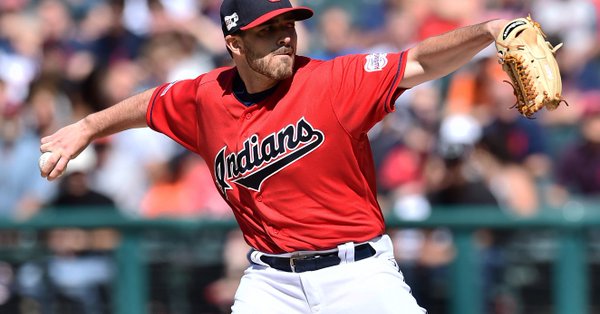 Adam Wainwright dazzled in his first complete game since 2016. St. Louis would go on to beat the Indians 7-2.

Wainwright, on his 39th birthday, made easy work of Tribe hitters going nine innings, giving up only four hits, and two runs.

Aaron Civale took the loss for Cleveland and now moves to 3-4 on the season. Civale did not seem to have his normal command as he walked two batters, gave up eight hits and five earned runs over six innings.

Tyler Naquin started the scoring in the top of the second as he extended his hitting streak to 10 games with a home run that barely cleared the wall in right field.

The call on the field was not a home run but replay clearly showed the ball over the wall hitting a railing. This drove in Franmil Reyes who had walked earlier in the inning giving Cleveland a 2-0 lead.

That lead would be short-lived when the Cardinals came back in the bottom of the second when Dexter Fowler doubled down the right field line with the bases loaded scoring Paul Dejong and Yadier Molina tying the game.

Dylan Carlson would give St. Louis the lead with a two-run single that just snuck under Carlos Santana’s glove at first to make it a four-run inning for the Cardinals and a 4-2 lead.

Civale would have another uncharacteristic issue when he balked with Paul Goldschmidt on third to gift St. Louis another run in the bottom of the third inning making it a 5-2 lead.

The Cardinals would add a run in the seventh when Fowler hit his second home run of the series when he blasted a home run into the Cardinal bullpen off of Indians reliever Cam Hill. This gave St. Louis a 6-2 advantage.

Finally, the scoring would end in the eighth when Molina singled to right scoring Dejong and making it a 7-2 game, which would be your final.

Tough loss for the Tribe today, it ended their 10 game road win streak but there is no reason to be upset with this loss.

It was a great series against a really good St. Louis ball club. The offensive explosion on Friday night was a beautiful sight.

Carrasco pitching six shut out innings on Saturday and a hard-fought, extra-inning win really did this team a service.

While the Indians are by no means hitting the cover off the ball, Naquin and Reyes are seeing the ball very well right now. Francisco Lindor and Cesar Hernandez have quietly moved into eighth and ninth respectively in hits in the American League.

Monday will be a big day for the Indians as it is the trade deadline for this season. Will the Indians deal Mike Clevinger for some offensive help?

We will know by this time tomorrow.