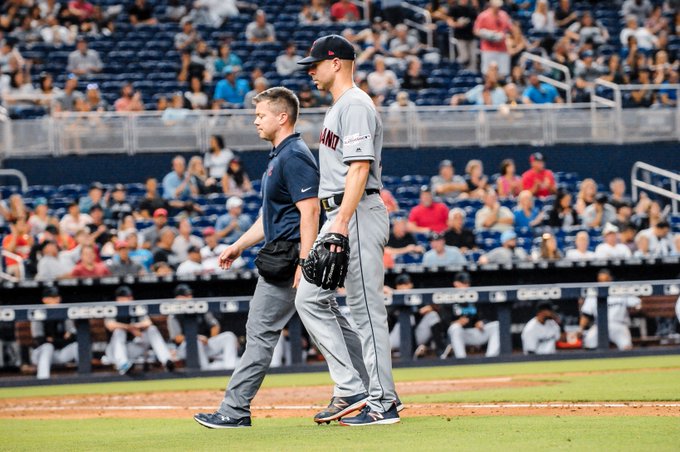 The Indians were hopeful that ace Corey Kluber would need one more rehab start and then possibly be able to rejoin the big league roster – maybe as soon as this weekend when the team plays host to the Kansas City Royals.

That now does not looks like it will happen, as Sunday in Kluber’s rehab with the AAA Columbus Clippers, he was pulled after throwing just one inning with left abdominal tightness.

The two-time Cy Young award winner is expected to be back in Cleveland Monday to have more testing, and possibly to get an MRI.

All Kluber could muster was 20 pitches in the first inning before being pulled. He waled a pair, and didn’t allow a hit or run.

It’s been a tough season for Kluber, who has been working his way back from being hit in the forearm back on May 1st, suffering a broken bone.

If things would have gone right for Kluber today, he would have thrown 75-80 pitches, and if gotten a clean bill of health could have joined the Indians rotation as soon as this upcoming weekend.

A Wild Four Days in NY Leads to an Indians Split with the Yankees; Observations from the Latest 8-4 Tribe Win
Podcast: CLE Sports Talk with Casey Drottar – 8.18.19