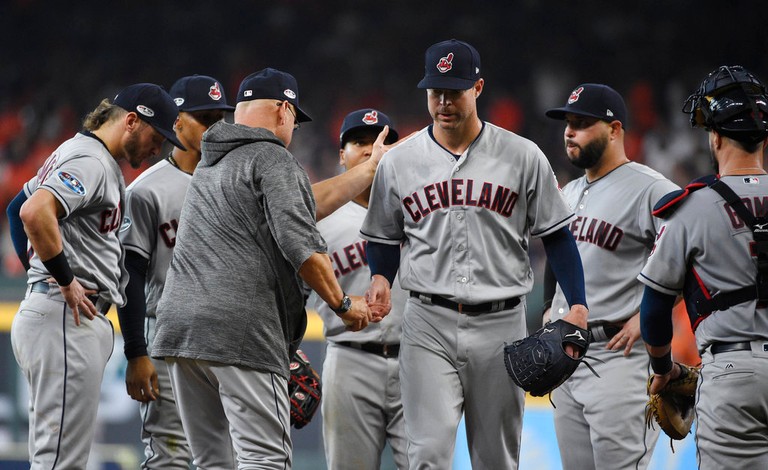 This series may not last long.

We can say, Kluber from the regular season is not the Kluber in the postseason. The bullpen was not good but gave some hope before everything escalated in the seventh inning. Bats was a little quiet against Hoston pitching, especially against starter Justin Verlander. With all that, Indians lose the first game 7-2  of the American League Division Series.

It looked like no one would score against the two former Cy Young pitchers until Houston change that thought.

No answers against Verlander

Justin Verlander took control from the first pitch he threw to the last.

Indians had no answers against starter Justin Verlander who was lights out. Verlander had a no-hitter through five innings until catcher Yan Gomes broked it up in the sixth.

Next batter, the right-hander struck out Jason Kipnis in a nine-pitch at-bat but Francisco Lindor reached on a base on a base hit, and Michael Brantley walked to load the bases – that was the only threat that the Indians gave Verlander. That was it for Verlander who was replaced by Ryan Presley.

As mentioned in today’s preview, the starting pitching would be valuable for the Indians in this series. Also when it rains, it pours. Houston attacked four runs against the Tribe ace and didn’t get out of the fifth inning as he pitched in a total of 4.2 innings giving up four runs on six hits.

Houston was hitless until Alex Bregman changed that in a hurry, connecting on an inside cutter on a home run. Astros made it 2-0 on Josh Reddick’s RBI single to left field.

Then Gives up back to back home runs by George Springer and Jose Altuve and that ended his day.

In the last four postseason starts:

Tomorrow is a must-win game. Mentioned in the preview, order the Indians to have a shot in this series is split in Houston.

Carlos Carrasco will be making his second postseason appearance. Last year against the New York Yankees, he pitched okay only giving up one run but Indians lost that game.

Meanwhile, Garrett Cole will be making his fourth postseason start. Last time he started in a playoff game, 2015 wild-card game against the Cubs.