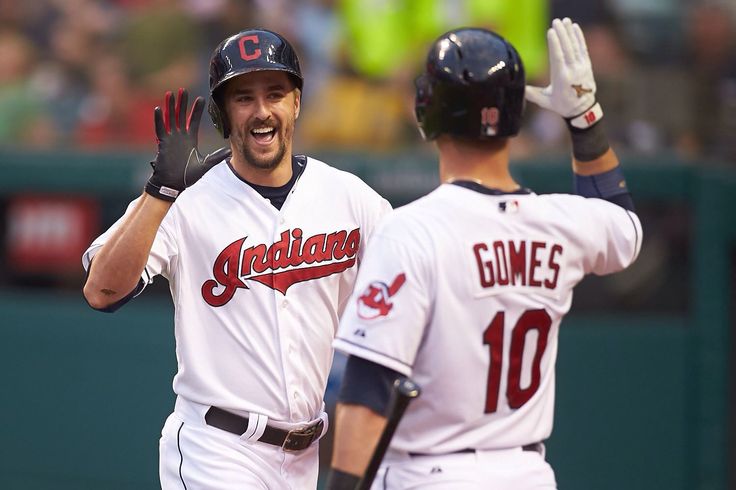 CLEVELAND – On a day when emotions ran high in the Indians organization with the announced rest of the season suspension of Marlon Byrd, the night ended on a much needed good note with a hard-fought 5-4 win in 11 innings over the Texas Rangers.

The win ends a three-game losing streak for the Tribe, and they now sit at 27-24 on the season.

It almost didn’t need to go to extras, as the team had a shot to win it in 9 innings, but for the first time this season Cody Allen wasn’t able to close out a save situation, as the Rangers scored one in the 9th to tie the game at four.

The game progressed into the 11th, when Tribe catcher Yan Gomes, who had sat the bench until the 9th, drove home Lonnie Chisenhall with a single up the middle to give the Indians their first walk-off win of 2016.

“It was big, we haven’t done so well in the late innings,” Gomes said. “We’re just excited to play well against a first place team, and going to try and get the momentum going after this game.”

It was Gomes’ second career walk-off hit, the first being a little bit more dramatic when he crushed a three-run homer against the Seattle Mariners to win a game back on May 20th 2014 at Progressive Field.

Oddly enough, that hit too was in extra frames, as it came in the 10th inning.

Wednesday after Chisenhall doubled to start the inning, Gomes actually tried to bunt, but he pushed it foul. He then more than made up for it with a seeing-eye single to center to win the game.

“Amazing, anytime you get any type of chance to impact a ball game, you try to take full advantage of that,” Gomes said. “I tried bunting, it didn’t quite work out, but after that you have to find a way to get him to third or try to get him in.”

Gomes has a career six RBI in extra innings, and while his average is still just at .176, he’s doing it when it counts, as he’s hitting .351 this season with runners in scoring position.

His manager Terry Francona appreciated his effort on the bunt, but was more than happy he had a chance to break an 0-for-13 streak with a game-winning hit.

“He even tried to lay down a bunt which I thought was a really good attempt because we have to get him to third,” Francona said.

“He stayed on that ball, so at worst we’re going to have Lonnie at third, and it sneaked through there. I think that is going to do Gomer a world of good.”

The Rangers got a run in the first off Indians starter Trevor Bauer, but Mike Napoli put the Tribe up 2-1 in the bottom of the frame with his 12th homer of the season.

The game was tied at two when Juan Uribe put the Indians up what appeared to be for good in the 8th with a single that scored Jose Ramirez to break the 2-2 tie and give the Tribe the 3-2 edge.

Bauer went seven innings, allowing three runs on just four hits, three walks and six strikeouts. The seven innings ties his longest outing of the year, back on May 10th when he helped the Indians shutout the Astros 4-0 in Houston.

The Rangers tied it in the 9th when Allen gave up a leadoff walk, then a bloop single to center by Elvis Andrus to put runners on the corners with no outs.

A fielder’s choice by Jared Hoying tied the game at four, and it stayed that way until Gomes’ heroics in the 11th gave the Tribe the win.

The Indians will kickoff a four-game series at Progressive Field with the Royals on Thursday night, and it will also be the return of Carlos Carrasco, who comes off the DL to start for the Tribe.

With the Return of Carrasco, It’s Time for the Indians Rotation to Round Into Form
Walk Off Fun Again: Lindor’s Triple Keys 9th Inning Rally As Indians Top Royals 5-4