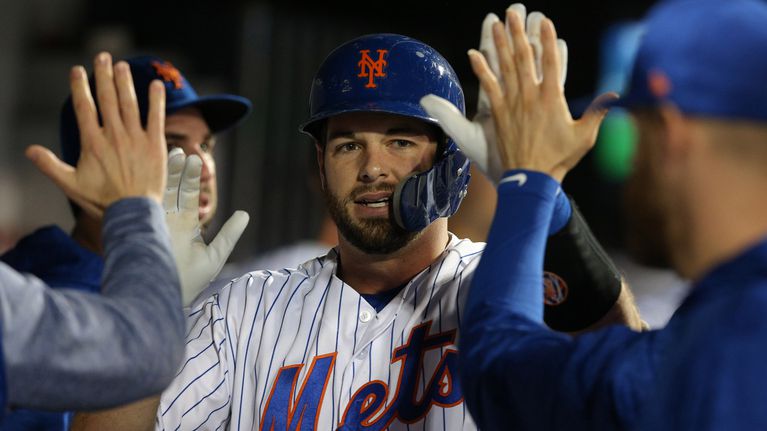 The Indians Sunday afternoon made a deal with one of their old friends in former pitching coach Mickey Callaway and the New York Mets, acquiring catcher Kevin Plawecki.

The deal included the Indians sending right handed pitcher Walker Lockett and infielder Sam Haggerty back to the Mets.

The 27-year-old catcher is 6’2, 210 pounds, and hits and throws from the right side. Plawecki last season played in 79 games for the Mets, hitting .210 with seven homers and 30 runs batted in.

He has spent parts of the last four seasons on the Mets roster, including all but six weeks last season as he spent six weeks on the disabled List (April 13-May 27, broken left hand).

Plawecki was picked by the Mets in supplemental first round (35th overall) of 2012 draft.

Here’s what Baseball Prospectus had to say about Plawecki:

Plawecki offers a bat-first profile that centers on his extreme knack for contact. He has excellent bat-to-ball ability and his contact is frequently hard and sprayed to all fields. Armed with a strong knowledge of the strike zone, an ability to recognize pitches quickly, and a willingness to work deep into counts, Plawecki is frequently in a position to drive pitches. His power plays to the gaps and as a full-time player he could notch 20-25 doubles and augment that power with 10-12 home runs when he turns on a pitch.

All told, Plawecki’s offensive game should hold up a the big-league level, where he is capable of posting a solid batting average and high on-base percentages, with some fringe power backing it up. That type of offensive package should play well at the catcher position in today’s game, and gives him a chance to be an above-average offensive contributor.

With the Indians moving Yan Gomes to the Washington Nationals earlier in the offseason, it’s expected that Plawecki will compete for playing time with Roberto Perez as well as with Eric Haase, who was a September call-up for the Indians last season.

Lockett was with San Diego last season, and he 0-3 appearing in four games for them with an ERA of 9.60. Haggerty played for both AA Akron and AAA Columbus last season, and in 87 games with the Rubberducks hit .243 with four homers and 39 RBI.

Will the Indians Pull the Trigger on a Free Agent Oufielder to Help for 2019?
Indians Announce 2019 Game Times and Broadcast Schedule