Indian Summer Ends; Tribe Falls in Game Seven of the World Series to Cubs in 10 Innings 8-7 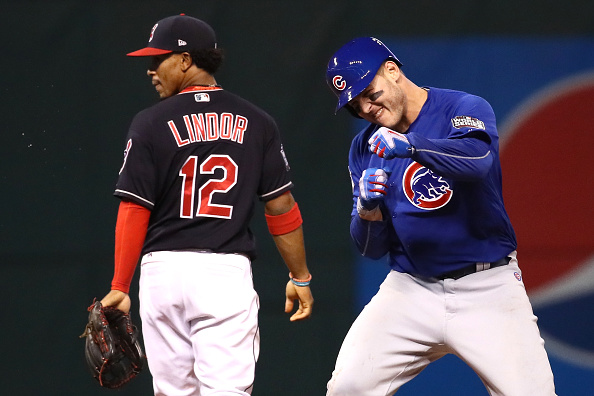 CLEVELAND – Indians fans will have to wait longer for their beloved Wahoo’s to bring a title back to Cleveland, as the gas tank Wednesday at Progressive Field reached empty in a hurry in game seven of the World Series despite an unreal comeback that showed just how much heart the Indians had all season long.

The Indians fell to the Chicago Cubs 8-7 in 10 innings, becoming just the sixth team in Major League history to blow a 3-1 series lead.

Cleveland seemed in control of the Series after a decisive win Saturday in Wrigley Field, but couldn’t close the door given three chances, two of which came in Progressive Field.

The Indians trailed all night, and were down to their final four outs with no one on in the 8th inning down 6-3, but it was then they rallied for three runs to tie the game and put fans even more on the edge of their seats.

Brandon Guyer hit a run-scoring double off Cubs closer Aroldis Chapman after Jose Ramirez singled with two outs, and then Rajai Davis worked the count, and blasted a two-run homer to the home run porch in left to tie the game at six, sending Progressive Field into a frenzy.

The Indians still had a chance that inning, as Coco Crisp singled, but Yan Gomes struck out to end the frame.

The two teams went scoreless in the 9th, but the Cubs bats awoke in the 10th, scoring two runs to put the game away off Indians reliever Bryan Shaw.

With runners on first and second, Ben Zobrist doubled down the line in left with two strikes, giving the Cubs a 7-6 lead. Addison Russell then singled in another run to cushion Chicago’s lead to 8-6.

The Indians, after losing game six 9-3 on Tuesday night, were hopeful their ace, Corey Kluber, would be able to recreate the magic he’s shown all postseason, as he entered the final game with an ERA under one.

It was not to be, as throwing for the second straight game on three days rest, Kluber didn’t even record a strikeout, and was knocked out after a solo homer by Javier Baez for the Cubs in the 5th that put the Cubs up 4-1.

One could have seen the rough outing for Kluber coming, as he gave up a solo homer to Dexter Fowler on just the 4th pitch of the game that ignited Chicago fans that came in full force to Progressive Field to watch their team break their 108-year title drought.

Cubs starter Kyle Hendricks went 4.2 innings, allowing a run on four hits. The Indians tied the game in the 3rd, as Crisp doubled, went to third on a sac bunt by Roberto Perez, and scored on a single by Carlos Santana.

The Tribe had a shot to add more in the inning, as Baez dropped a relay in an attempted double play, but Mike Napoli lined out to third to end Cleveland’s best threat of the night.

Chicago took the lead in the 4th, adding two runs on a Russell sacrifice fly to center that scored Kris Bryant, and later in the inning with two outs Willson Contreras doubled to deep right center to score Zobrist.

Davis didn’t get a good read off of Contreras’ bat, as he appeared to take a step in, then went back to the wall but couldn’t make it as the ball dropped in.

After Baez’s blast to make it a three-run game, the Indians turned to Andrew Miller, and even he struggled, as he allowed a run in the 5th to make it 5-1 after Anthony Rizzo hit a two-out single to shallow right to score Bryant.

The Indians rallied back to close the lead to 5-3 after a couple Cubs mistakes opened the door and gave the Tribe hope.

With two outs Santana walked, and Hendricks got the hook from Cubs manager Joe Maddon at that point, turning it over to one of his starters, Jon Lester.

Jason Kipnis hit an dribbler in the infield and new Cubs catcher David Ross threw it wide of first and Santana went to third and Kipnis second.

Then with Francisco Lindor at the plate, Lester threw a wild pitch, and the ball rolled away, allowing not only Santana to score, but Kipnis to come around from second for a run that closed it to a two-run game.

Ross made up for his mistake in extending the Indians inning in the 6th, as he blasted a solo homer off Miller to center, putting the Cubs back up by three at 6-3.

The Indians magic ended in the 10th, as despite a two-out single by Davis that scored Guyer, it wasn’t enough as Michael Martinez ended the game with a weak grounder to third.

The Cubs celebrated their long awaited title, while the Indians will spend a long offseason waiting to get back on the field with the hopes of making sure to do one thing in 2017.