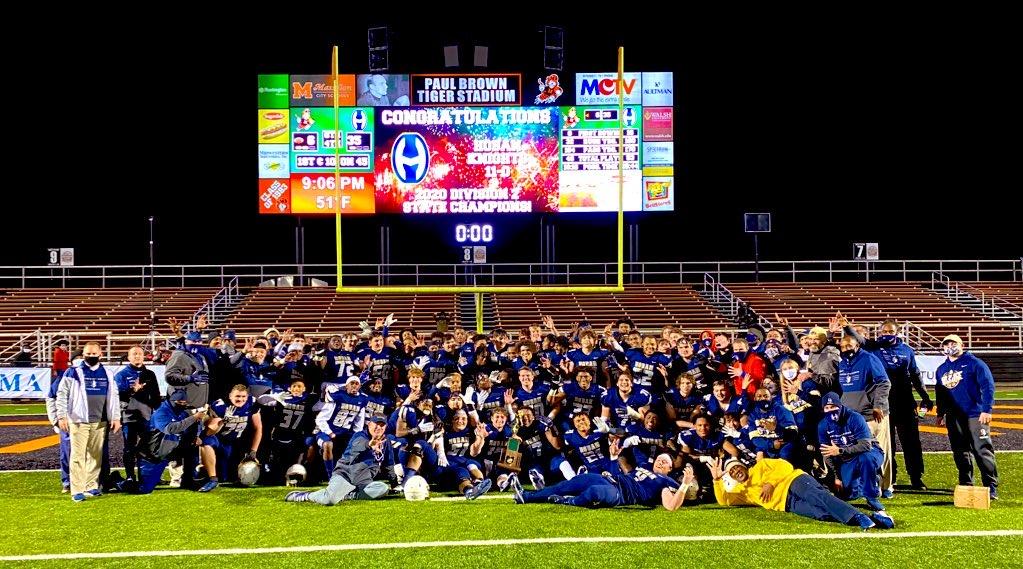 MASSILLON, OHIO — When a team is as good as Hoban, they can win on any field at any time.

For the first time since 2004, a championship game was played on the home field of a participating team.

Hoban put the “home field advantage” rumors to bed on Friday night with a 35-6 blowout win over the hosts, Massillon Washington.

The opening drive was a cakewalk for Hoban, as a big run for Victor Dawson set up a 2-yard quarterback keeper for Shane Hamm.

Hoban has no problems with their opening drive!

Then in the final seconds of the first, Hamm connected with Kharion Davis for an 11-yard touchdown to make the score 14-0.

Heading into halftime, Massillon looked like they had a chance. After a touchdown pass from Zach Catrone to Caiden Woullard made the score 14-6, the Tigers would receive the second half kickoff.

Massillon is on the board! 16-yard TD pass from Zach Catrone to Caiden Woullard.

The 8:48 mark of the third quarter is when Hoban started to pull away. Kharion Davis broke off a 62-yard catch-and-run to make the score 21-6.

Kharion Davis is having an unreal night!

A pair of fourth quarter touchdowns would put this game out of reach, with the dagger coming on a 36-yard fourth down touchdown pass from Hamm to Tyson Grimm.

On fourth down, Hamm connects with Tyson Grimm for a 36-yard touchdown!

Touchdown pass from Shane Hamm to Chances Carter-Hill late in the fourth. pic.twitter.com/ETne4Ykbbu

Hoban went on to win 35-6 with stellar defense and an impressive offensive performance.

Kharion Davis had one of the most impactful games of his career. The senior finished with two touchdown receptions for 73 yards on offense, along with an interception and a forced fumble on defense.

The Hoban defense also had five sacks in the game, 2.5 of which came from Wisconsin commit Darryl Peterson.

Massillon is once again held short of a state title, finishing as the Division II runners-up for the third consecutive year.

The Tigers haven’t won a championship since the OHSAA began football tournaments in 1972.

It was an all around dominant night for the Hoban Knights, who go on to win their fifth title in six years.