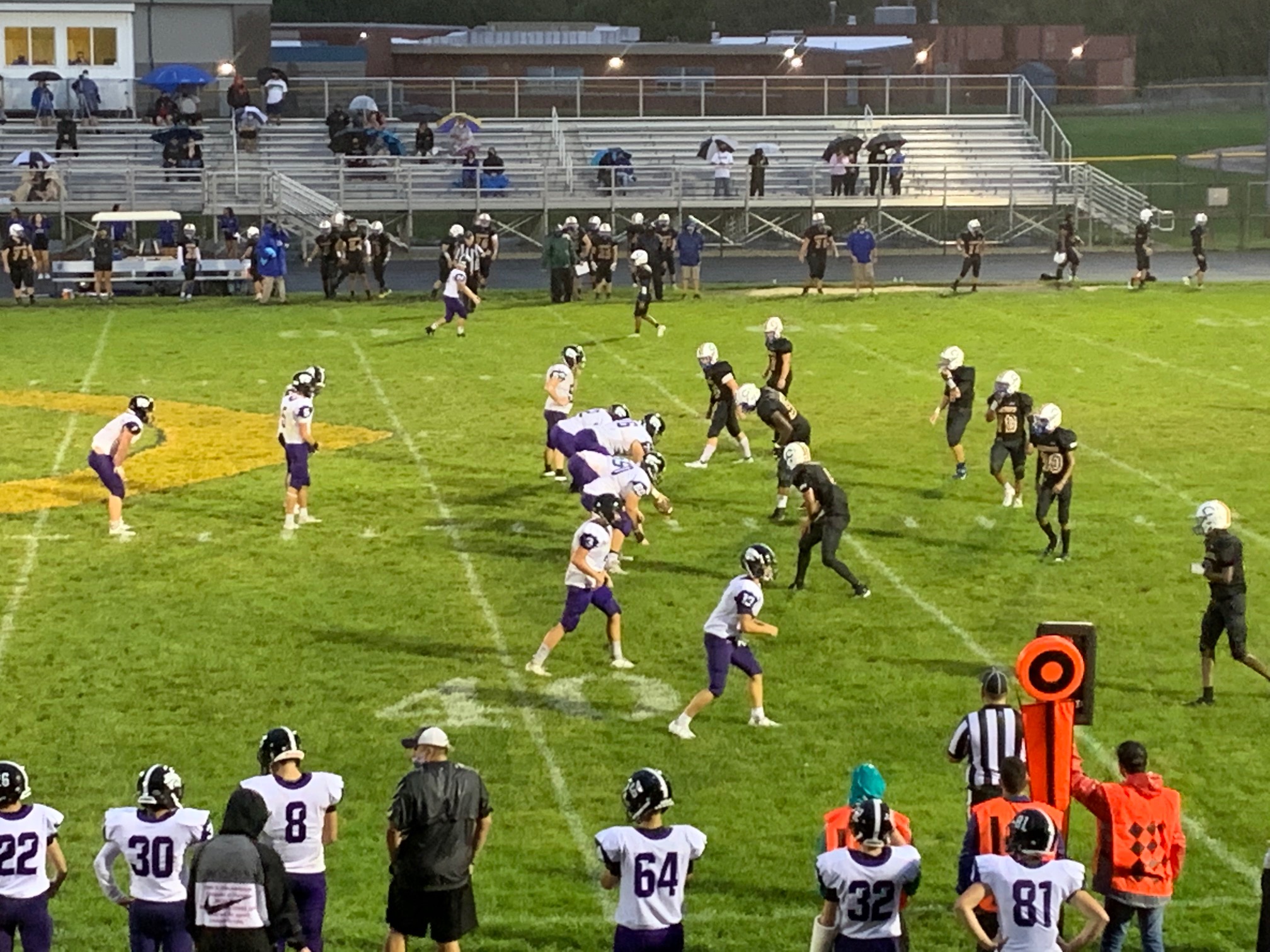 A week one matchup between Lorain County 8 contenders Keystone and Clearview got off to a bit of a slow start, the heavy rain and new COVID-19 protocols had both teams stalled to start the season. It is one of those “you had to be there” moments seeing how much COVID has changed the game of football.

Both the Wildcats and Clippers both tried to pass the ball early on in the game, but Mother Nature had other plans, it was short passes and the run game that were the keys to advance the ball offensively.

The Wildcats reached the end zone first on a 5-yard screen pass to Deghan Rigda to take the 6-0 lead in the first quarter.

Throughout the quarter, both teams tried to mix the pass game into their offenses but it simply wasn’t working for either team. The mix of first game jitters and the rain were big factors in the multiple incomplete passes.

Another big factor was Keystone’s large defensive line getting into the face of Clearview’s 5’9 quarterback Robert Davis.

What helps Davis’ game is he is very quick on his feet, we seen lots of this last year as he played running back for Clearview, rushing for nearly 800 yards last season.

Penalties also seemed to set both teams back slightly in the first half, which is very common for week one high school football. Going deeper into the second quarter, Keystone started to control the ground game, and also the clock very well maintaining their 6-0 advantage, lead by sophomore quarterback Konner Rodick.

Keystone then extended their lead to 12-0 on a 36 yard TD run by Gideon Lampron, once Keystone got Lampron in a rhythm, the Wildcats knew their plan, run the ball.

Lampron had 12 carries for 136 yards with 9:26 left in the first half. Momentum seemed to shift as Jordan Hatcher of Clearview recovered a Keystone fumble with 8:05 left in the half.

As we neared halftime, we seen Clearview strike on a 45 yard pass to Hiram Carrareas to put Clearview in the red zone. Leading to Robert Davis taking it into the end zone on a 6 yard run to cut the Keystone lead to 12-6 with 1:58 left in the half.

As Clearview went to kickoff we entered a lighting delay. Once we came back from the weather delay, neither team could produce much of anything offensively.

As we started the 3rd quarter the rain finally receded, Clearview started to gain momentum off of a great Robert Davis pass that even being called back for holding, got the offense confident, especially recovering a fumble from Keystone of the fair catch attempt of Clearview’s punt.

Although carrying a large amount of momentum, Clearview couldn’t execute. Both teams did not help themselves out, they both struggled with penalties all night long.

Keystone struck with 1:26 left in the 3rd off a 60 yard rush from Lampron, putting him over the 200 yard mark for the night, making the score 21-6 Keystone.

Going into the 4th quarter Keystone dominated the game in 2 major aspects, their defensive line, and running the ball on offense.

Clearview simply couldn’t get anything going offensively. Keystone tried to slow the game down with under 10 minutes in the 4th, but with a new 2020 rule of referees not touching the ball, the clock still stops after each play, referees set an orange bean bag in place of the ball so the football has as the least amount of people touching it as possible.

Keystone put the mail in the coffin with an interception from Gideon Lampron extending the lead to 27-6 with 7:29 left in the game. Keystone then took possession, winded down the clock to end the game and take a 27-6 victory in week 1.