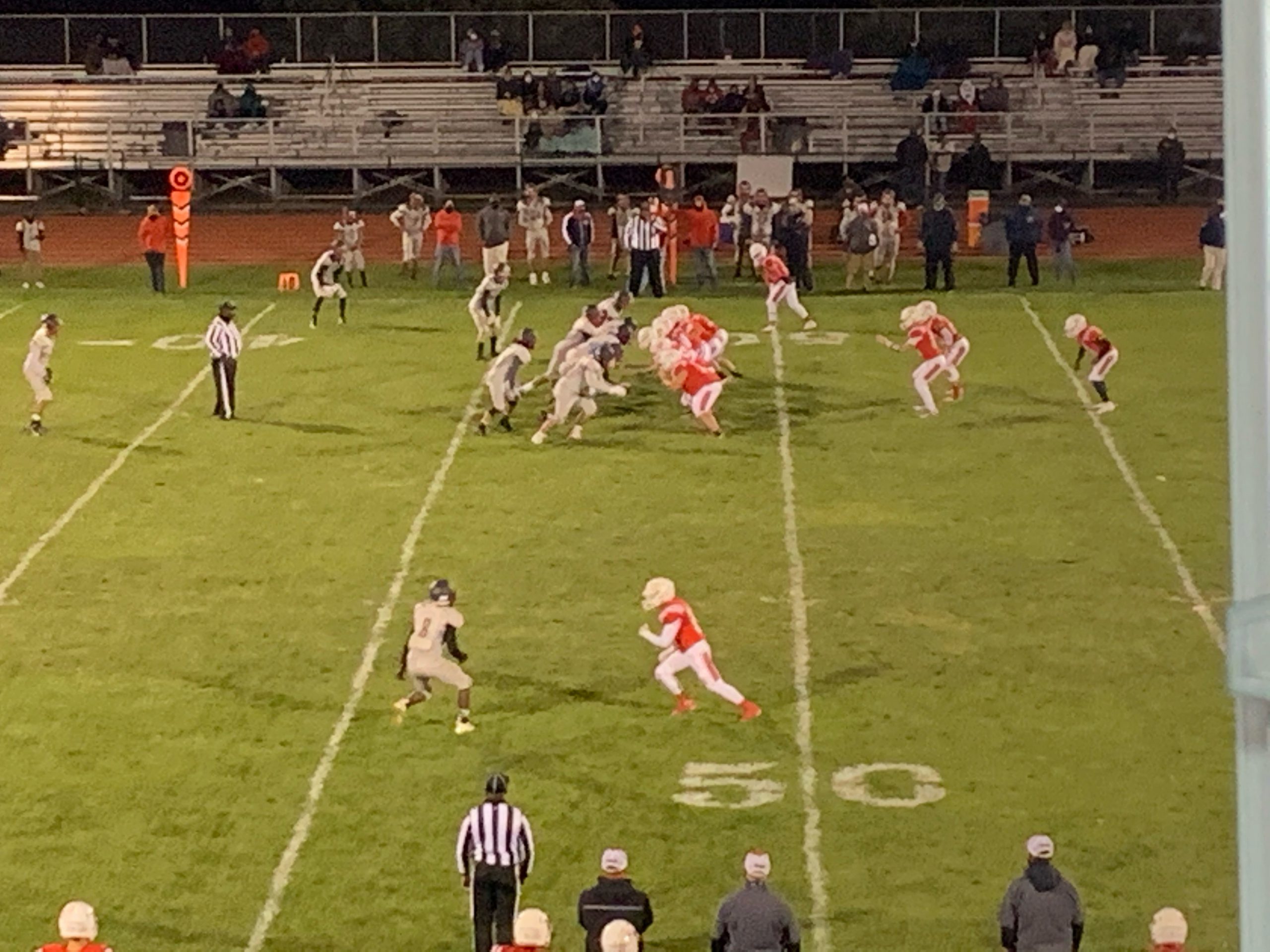 At the begging of the season, we had no idea if we’d even be playing football, but The Firelands Falcons hosted the Oberlin Phoenix in Week 6 LC8 action.

Not too long after,the Falcons scored again after stopping the Phoenix offense, it was Donald Crawford again, Firelands took the 14-0 lead early on in the first.

Firelands dominated the game early, with 2:38 left in the first Weston Strader rushed in the end zone from a yard out, making the score 21-0 very early in the game. The Firelands defense seemed to keep taking over off of Oberlin turnovers at the 15 yard line each time they scored.

Once again Firelands scored, and once again it was Donald Crawford scoring, the Falcons lead 28-0 now with 1:34 left in the first.

On the kickoff, Firelands recovered an Oberlin fumble to set up once again in the same spot. Firelands QB Kyle Ransom took it in himself after running for his life, now the score 35-0 with 52 seconds left in the first.

Starting off the second quarter, Oberlin had a high snap, allowing the Falcons to sack Andre Yarber of Oberlin for a safety, making the score 37-0.

After a big Falcons return, Austin Copen caught a screen pass and scored his first TD of the night, making the score 44-0 with 11:17 left in the second quarter.

Oberlin kept fighting for some offensive yards, but the Falcons defense who before last week only gave up 3 points all season, was not letting Oberlin get anything going.

Getting deep into the second, Oberlin started to move the ball very well and got into a good rhythm, until Firelands defender Jack Velerius recovered the Oberlin fumble and running it back over 50 yards and scored his first career TD, making the score 51-0 with 2:58 left in the half. We’ve been in the running clock regime for awhile at this point.

Going into halftime our score remained 51-0.

Starting the 3rd we seen the starters for Firelands on the sidelines. Firelands ended up intercepting after punting to Oberlin, it was Thomas Ives on the interception, the Falcons took over at Oberlin’s 40 yard line.

Once Firelands took possession in the second half, they wound down as much time as they could before snapping the ball.

Oberlin kept trying to fight for yards all game on offense, but couldn’t quite get anything going heading into the 4th.

At this point it was 8:19 pm, the game started at 7:00 pm. Oberlin did gain some momentum, forcing a fumble on the goal line. Then Andre Yarber scrambled for 75 yards setting up shop at the 5 yard line.

But the Phoenix couldn’t convert, the Falcons took over from their own goal line with 5:39 left in the game. Firelands wound down most of the clock, even on the punt, Oberlin would take over with 40 seconds left, but with the running clock, not much could be done, Firelands took home a win on homecoming night 51-0.

Firelands heading into the OHSAA playoffs are looking for their first playoff win in school history.