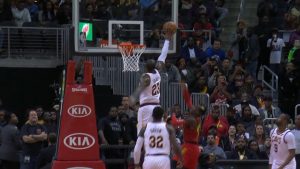 Aside from the wealth of new contributors, the Cavaliers appeared to be playing a new brand of basketball right from the outset. Cedi Osman drew one-on-one coverage with Irving on a multitude of occasions, using his lateral movement to fend off a layup and mid-range jumper in the first quarter. Tristan Thompson jumped to his peak elevation, preventing Jayson Tatum from finishing a dunk. A rejuvenated J.R. Smith posterized Aron Baynes on offense before emphatically blocking a three-point attempt by Semi Ojeleye.

Those were just the plays from the first 10 minutes of the one-sided affair.

The Cavs led by as many as 29 points, a convincing statement that they are still capable of returning to the NBA Finals for a fourth straight season.