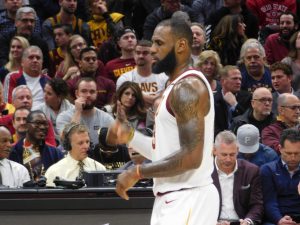 The Cavaliers collectively held their breath when James crashed to the floor holding his knee, especially after he tweaked his ankle against Atlanta on Friday.

A dominant return allowed head coach Tyronn Lue and company to let out a sigh of relief.

James flirted with a third consecutive triple-double, finding creases in the defense before either dishing it out to Hill and Hood, or laying the ball in the cup with ease. His top-of-the-key three-pointer before the intermission was just in front of the logo at center court.

The 33-year-old veteran had the highest +/- rating on the Cavs (+23), and turned a playoff atmosphere into a sea of boos from the Boston faithful by the start of the fourth quarter. He finished with nine field goals on 20 attempts, and even found the time to smile with his teammates for the vast majority of the final period.

.@KingJames is all of us right now. #THELAND! pic.twitter.com/DpAOiq3cYr