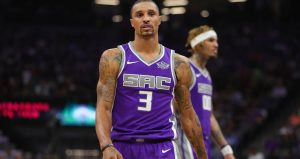 There was a newfound energy on both ends of the floor for the road five, as they leaped into passing lanes and applied more on-the-ball pressure to induce 14 turnovers. Most notably, Hill used his seven-foot wingspan to neutralize Irving and limit Jaylen Brown to 2-of-9 shooting from the field and 0-of-5 from beyond the perimeter. Hill entered play with a career-worst 112.9 defensive rating, but his return to a playoff-caliber organization might improve those numbers moving forward.

Having James on the floor helped open up space for Hood in the half-court offense, as his left-handed shot immediately became a weapon off the bench. Similar to Hill, Hood is having his best year from deep, as evidenced by a career-high 38.9 percent three-point percentage.

Clarkson was efficient and under control, with no turnovers and 63.6 percent (7-of-11) shooting from the field. His biggest highlight came on a steal and transition layup in the early stages of the second quarter.

Larry Nance Jr. had two field goals, a pair of slam-dunks that lifted the Cleveland bench to its feet.