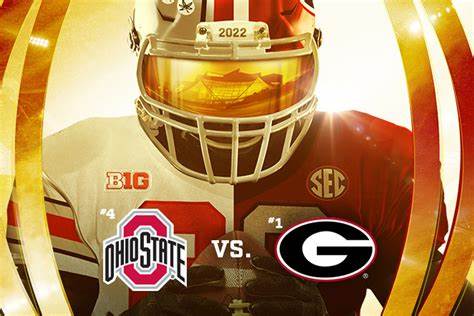 The defending national champion Georgia Bulldogs knocked off the Ohio State Buckeyes 42-41 in the Chick-Fil-A Peach Bowl to advance to their second consecutive National Championship game.

It was a back-and-forth shootout with each team emptying the gas tank for a non-stop 60-minute explosive offensive performance that saw the game come down to the wire…and a missed field goal.

The Buckeyes struck first in the first quarter with C.J. Stroud finding Marvin Harrison Jr. open for a 31-yard pass to put the Buckeyes up 7-0.

The Bulldogs got to work on offense on their next possession and answered back with a 25-yard TD pass from Stenson Bennett to Kenny McIntosh to bring the first quarter to a close tied at 7-7.

The fireworks picked up in the second quarter with each team finding the endzone on multiple occasions. A Miyan Williams TD run, and another Marvin Harrison Jr TD catch two minutes later put the Buckeyes ahead 21-7 five minutes into the second quarter.

A pair of rushing touchdowns from Georgia’s Kendall Milton and Stenson Bennett, and a 32-yard field goal from Jack Podlesny put the Bulldogs on top 24-21 with less than two minutes remaining in the first half.

A minute later C.J. Stroud found Xavier Johnson for his third touchdown pass to put the Buckeyes back up top 28-24 to bring the exciting first half to a close.

As expected, the action picked back up in the third quarter when C.J. Stroud found Emeka Egbuka on a 10-yard TD pass to push the Buckeyes lead to 35-24 five minutes into the quarter. A missed field goal from Georgia and two forced punts from the Buckeyes defense kept the Bulldogs out of the end zone for the entirety of the third quarter.

The Buckeyes final possession of the third quarter was brought to a brief stoppage when wide receiver Marvin Harrison Jr. went up for a pass in the back of the end zone and was met with a brutal hit from Georgia’s Javon Bullard, originally reviewed for targeting but was ruled against. Harrison remained on the ground for a few minutes before being helped off the field by personal. Harrison would leave the game with a concussion and not return

Buckeyes’ kicker Noah Ruggles ended the third quarter with a 25-yard field goal to keep the Buckeyes on top 38-24 entering the fourth.

Georgia marched down the field on their first possession to enter the fourth and set up a 31-yard field goal from kicker Jack Podlesny to bring Georgia within 11 points for a score of 27-38 with 10 minutes remaining in the game. 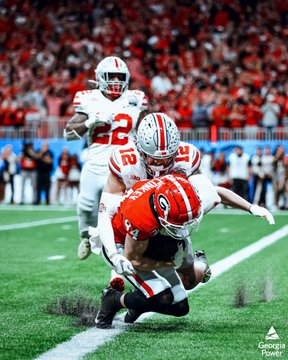 The Buckeyes were unable to move the ball much on their next possession and lined up for a punt on 4th & 1 with nine minutes to go in the quarter. Coach Day drew up a fake to convert the 4th down and give Ohio State a fresh set of downs… or so he thought.

Georgia coach Kirby Smart, privy to the Buckeyes play design, called a timeout just as the play was being snapped and thwarted Ohio State’s chance of converting a crucial fake punt and fourth down. The Buckeyes were forced to punt the ball and set Georgia up for a drive that saw momentum begin to shift.

Georgia took quick advantage of their next possession when Bennett found a wide-open Arian Smith for a 76-yard touchdown pass, a play that was broken open when Buckeyes’ defender Lathan Ransom fell down in coverage and allowed Smith to break open and remain untouched as he walked into the end zone. The Bulldogs were successful on their two-point conversion to pull them within three points 38-35

The Buckeyes settled for a field goal on their next possession to increase their lead 41-35. 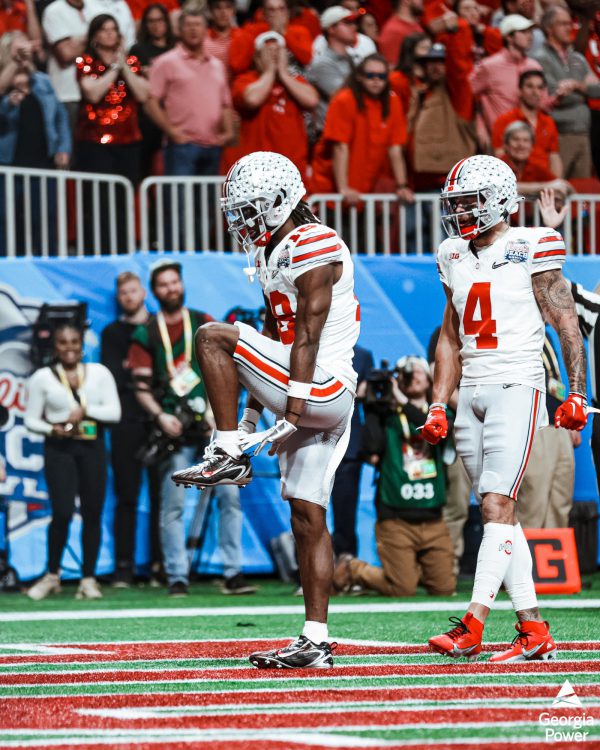 Georgia, riding the momentum of their previous drive, drove right back down the field on a 5 play, 72-yard drive that ended with Bennett finding Adonai Mitchell for a 10-yard TD pass to take the lead  with less than a minute remaining in the game

The Buckeyes, starting at their own 25-yard line with 42 seconds remaining in the game, began their final drive of the night. A C.J. Stroud five-yard run, followed up by a Julian Fleming 12 yard catch and another 27-yard scramble from Stroud put the Buckeyes down on Georgia’s 31-yard line with 28 seconds to go in the game

Dallan Hayden took the next carry for a loss of 1 yard, and a pair of incomplete passes, that almost saw Stroud take a sack out of field goal range, set up the Buckeyes for a 50-yard game winning field goal with 3 seconds remaining

Noah Ruggles, with a season long 48-yarder and 85% field goal percentage on the year, hooked the kick wide left as time expired to give Georgia the hard-fought win

There are going to be many questions asked of the Buckeyes as they enter the off-season but for now, congratulations to the Georgia Bulldogs on the victory and advancement to the College Football Championship Game