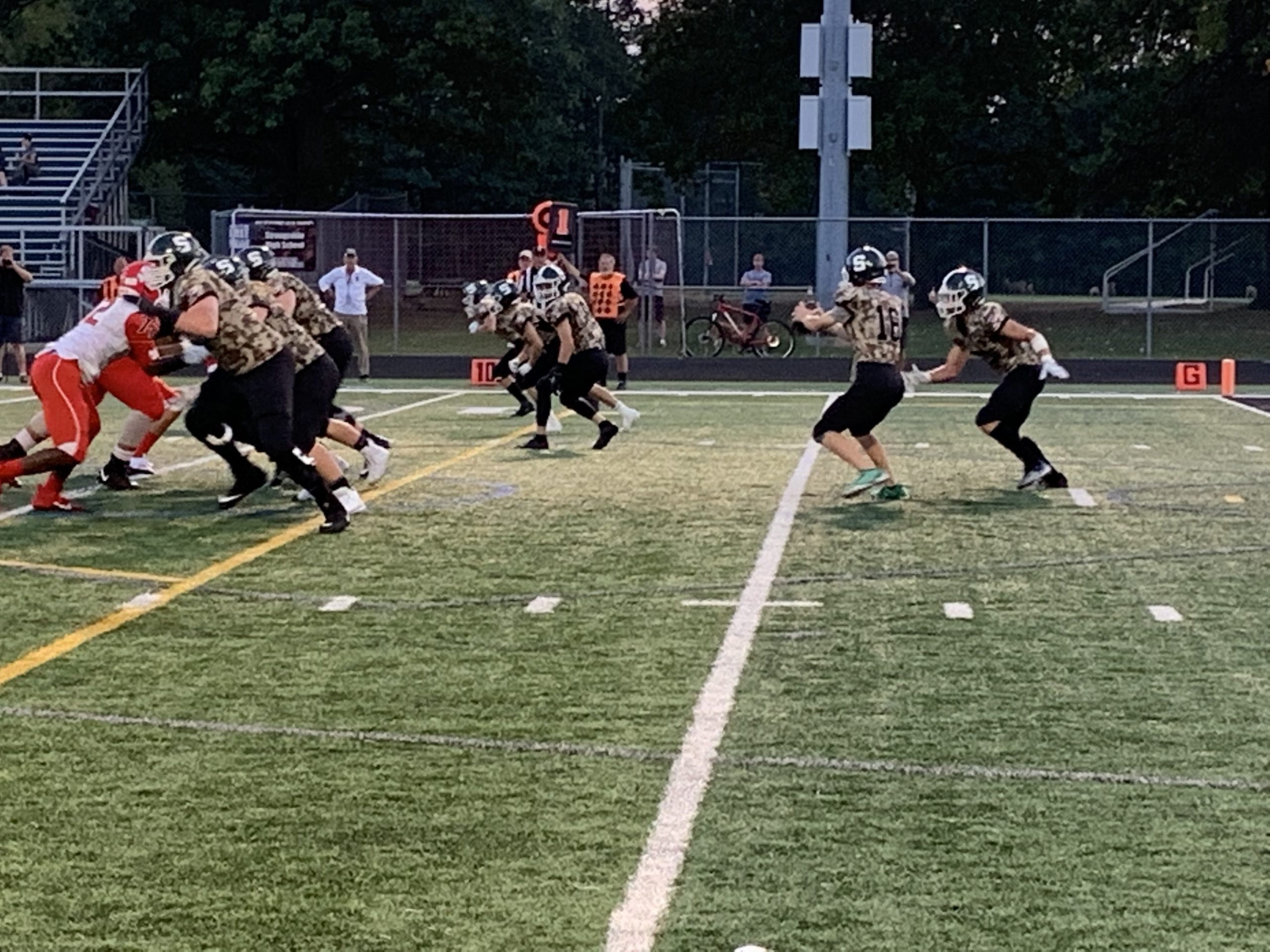 STRONGSVILLE, OH – The word of the night in Strongsville for Week 4 was Garret Clark.  Or more accurately, the name of the night.

The senior running back for the Strongsville Mustangs was literally the difference in the game.  Along with a game-high 179 yards rushing on 32 carries with 2 touchdowns, Clark scored the game-winner on a 97-yard kickoff return midway through the fourth quarter to give the Mustangs a 29 – 25 lead over the Shaker Heights Red Raiders in the Greater Cleveland Conference opener for both schools.

With the successful 2-point conversion, the Mustangs would lead 31 – 25.

After a fourth-down pass fell short for the Raiders, Strongsville ran out the clock for a final score of 31 – 25.  The win kept the Mustangs’ unblemished record intact at 4-0, 1-0 in GCC play.

The game started shakily for Strongsville as Shaker raced to a 14 – 0 first quarter lead.  Senior Raider Loudon Graham started the scoring just three minutes into the game on a 1-yard plunge.

Down two touchdowns, Strongsville finally gained momentum on offense in the second quarter.  Sophomore quarterback Maddux Beard, starting in place of the injured Tyler Wolters, hit a streaking Mitch Dutton down the home sideline on third down.  The junior wideout outran the Raider defenders for a 56-yd touchdown catch and run.  The Mustangs were on the board at 9:54 of the second quarter, trailing 14 – 7.

For the game, Beard completed five of seven passes for 99 yards and the one score.  Dutton was Beard’s favorite target with three catches for 69 yards and the long score.

The teams would then trade turnovers and possessions until senior Garret Clark scored his first touchdown from seven yards out to tie the game at 14 with 1:39 in the half.

The teams would go into their locker rooms tied at 14.

Strongsville received the second half kickoff and was moving the ball on the ground until disaster struck.  Senior Raider linebacker Avery Dunn scooped up a loose ball and ran 44 yards for the score.  With the 2 point conversion, Shaker had a 22 – 14 lead early in the third quarter.

On their next possession, the Mustangs drove down the field, their drive culminating in a 3-yard touchdown run by Clark.  The Mustangs failed on the 2 point try and trailed 22 – 20.  The quarter ended with this same score.

In the fourth quarter, the Mustangs would take their first lead of the game on a twenty-yard field goal by new kicker Wil Hryszko, giving Strongsville the 23 – 22 lead.

Not to be outdone, Shaker Heights played their own version of the three-point game on an impressive 40-yd field goal by junior Carson Fowler, giving the Red Raiders a brief 25 – 23 lead.

This lead was very brief as on the ensuing kickoff, Garret Clark saved his best heroics for the end of the game.  After initially mishandling the kick, Clark scooped up the ball, found an opening, and streaked down the left sideline 97 yards for the game-changing score.  The Mustangs made good on the 2 point conversion to lead 31 – 25 with 5:18 left in the game.

After trading possessions, Shaker had one last chance, but sophomore quartback Adam Diaz’s pass to senior wideout Noah Patrick fell just short on fourth down, allowing Strongsville to take over on downs and run out the clock.

After the game, Strongsville coach Lou Cirino talked about his team’s performance in the comeback win:  “At the end of the day, we overcame [mistakes], down 14 – 0, to come back from that, I don’t care who you are, who you’re playing, a tough team [like Shaker], that was resilient, our kids were tough tonight, they showed it.  All of our core values came out.”

Coach Cirino was especially pleased with the Mustangs’ run game: “We believe in running the ball, we believe you CAN run the ball based on what you do in the offseason.  And we were able to do that tonight, the whole offensive line, Blake Miller, Ryan Seefeldt, Nick Northup, Andrew Hudak, and Patrick Grealis.  They’re warriors up front.”

Cirino also had praise for Clark, saying, “Our tailback, obviously gets all the pub, and deservedly so.  [Clark] pours his heart out every single week, every single game.”

Special teams was a great boost as well as Wil Hryzsko’s field goal was the first one for the team all year.

Strongsville travels to Brunswick for Week 5 in a border rivalry game against the 3 – 1 Blue Devils, who suffered their first loss of the year against Solon tonight.  This game has huge implications for two schools trying to reach the upper level of the GCC.

Shaker Heights will host Solon in a game they need to win to stay in the hunt for the GCC title.

The player of the game was Strongsville senior Garret Clark who had 276 total yards and three total touchdowns.