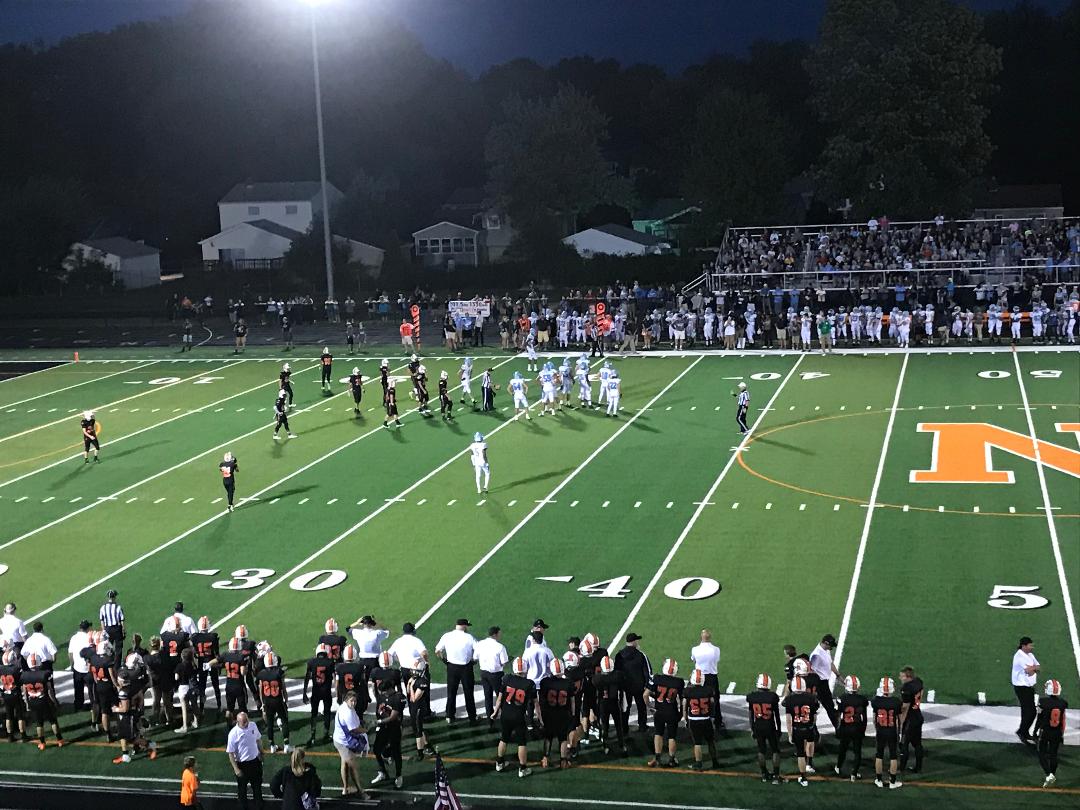 This game recap is brought to you by Mullins Construction.

EASTLAKE, OHIO – For the first time in 15 years, the Eastlake North Rangers (2-3, 1-1) were on the winning side of the Border Battle over the Willoughby South Rebels (2-3, 1-1). The Rangers scored 30 unanswered points in the 37-29 win over the Rebels at Nick Carter Stadium.

“We weren’t sure what to expect tonight in this game,” said North head coach Shawn Dodd. “We determined we had to run the ball and shutdown the weapons that South has on the field. When we started to double [Rico] Small, our def37-29 ensive unit made a huge adjustment. Our offensive and defensive lines really stepped up as the night went on. With the defensive line working, the front four were able to really get into the backfield and controlled the quarterback [Grosel].

On the second play from scrimmage, Willoughby South scored first as Justin Grosel found Rico Small for a 62-yard TD pass. The Rebels forced the Rangers into a three and out before the Rebels took over again. Willoughby South drove 61 yards on a drive that was capped by a Dominic Hahner 21-yard field goal. Willoughby South led 10-0 six minutes into the contest.

The Rangers were held to 20 yards on their next drive, resulting in a punt. Small opened the next Rebels drive with a huge 26-yard run, leading to a 43-yard TD pass from Grosel to Xavier Hopps. Eastlake North blocked the extra point, giving the Rebels a 16-0 with two minutes left in the first quarter.

Eastlake North put together a nine play, 78-yard scoring drive at the outset of the second quarter. Brett Payne rumbled around the left corner on a 40-yard TD run. Dylan Froelich completed the two point conversion to Cameron Procter as North cut the lead to 16-8, two minutes into the second quarter.

The Rangers got the ball back in South territory with 3:38 to go in the first half after Grosel’s punt was blocked and recovered by the Rangers’ special team unit. After a key completion from Froelich to Sebastian Osler, Payne scored from one yard out. Froelich tied the game on a QB keeper during the two point try. The Rangers and Rebels were deadlocked at 16 heading into halftime.

The Rebels outgained the Rangers 307-131 in the first half with a big passing attack.

Grosel was intercepted on the Rebels’ first drive of the second half by Nathan Stuck. Eastlake North turned the turnover into a score with a rush-heavy drive. Payne pounded through the left side on a 7-yard TD run as North gained a 23-16 lead with 4:18 left in the third quarter.

A bad punt snap on the Rebels’ next drive put the Rangers in great field position again. Eastlake North started with the ball inside the South 30 as the third quarter was winding down. The Rangers doubled the lead less than a minute into the fourth quarter. On 4th and 1 from the one-yard line, Froelich called his own number on a keeper as North pushed the advantage to 30-16 with 11:09 left.

Willoughby South had a quick answer as Grosel threw two bombs to Drew Schoeppler (38 yards) and Hopps (33 yards). Grosel cut the lead to 30-23 with nine minutes left on a six-yard TD pass to a jumping Hopps in the right end zone corner.

On the next drive, Eastlake North attempted to kick a 36-yard field goal to add to the lead. The snap went into the backfield as the Rebels started with five minutes left. On the second play, Froelich blew up a screen pass and took Grosel’s throw 35 yards to the house. North had a 37-23 lead with 4:21 left.

Needing a quick score, South drove down the field over a two and a half minute span. The drive was capped on a Grosel 11-yard TD pass to Schoeppler. The extra point was blocked as North held a 37-29 lead with 1:41 left.

South attempted an onside kick but the Rangers recovered, sealing the win and ending the losing streak. North defeated South 37-29 for the first time since 2003.

Eastlake North used a rushing heavy attack as they compiled 273 of their 293 total yards on the ground. Payne led all rushers with 191 yards on 26 carries and three touchdowns. Froelich had 64 yards on 17 carries with one touchdown.

The Rebels will host Brush next week while the Rangers will travel to Riverside.