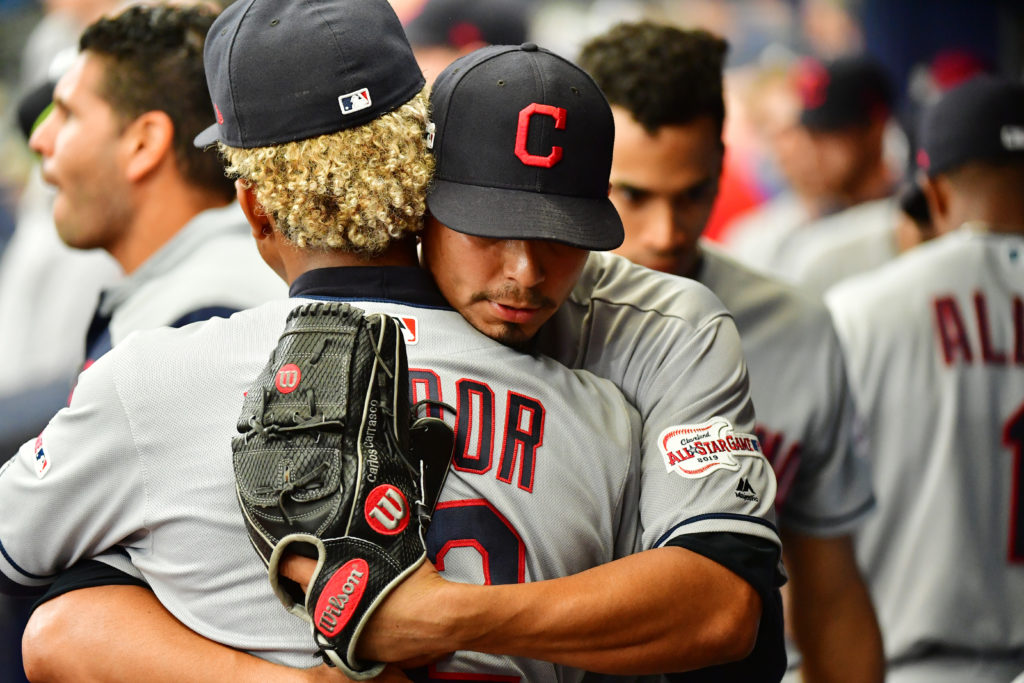 The season was on the line Wednesday for the Cleveland Indians in game two of the Wild Card playoffs against the New York Yankees. A misjudged rain delay forced first pitch back 40 minutes, and right into another delay in the bottom of the first. The Indians took an early lead, but the delay got to Carlos Carrasco in the fourth, as he surrendered a lead changing grand slam to Gio Urshela that gave the Yankees confidence.

Both offenses took turns trading leads throughout the game after the Urshela bomb, leading to an eventful ninth and a blown save from Brad Hand. The offense fell one run short and the season came to a close as the Indians lost 10-9 to the Yankees.

After a misjudged rain delay forced first pitch to be pushed back roughly 40 minutes, Carrasco took to the mound in a must win start for the Indians. Carrasco poured in a strong first inning, forcing DJ LeMahieu to ground out, before striking out Aaron Judge and Aaron Hicks to end the inning.

After Francisco Lindor led off the bottom of the inning with a ground out to shortstop, César Hernández and José Ramírez hit back to back doubles to put the Indians up 1-0 early. After the score the game would come to a halt still in the first inning for a second rain delay.

The second rain delay of the night lasted roughly 30 minutes before the Yankees sent starter Masahiro Tanaka back out with still only one out in the first inning and Ramírez on second. Carlos Santana flew out in the next at-bat, before Franmil Reyes drew a walk to keep things alive.

With things still alive in the first, Josh Naylor continued his hot streak with a double to center field, scoring both runners on the play to extend the lead to three runs. Naylor became the first player in MLB history to go five for five in his first five postseason at-bats. Roberto Peréz brought Naylor across with a single in the ensuing at-bat, before Tyler Naquin flew out to end the inning with a 4-0 Indians lead.

The Yankees began to close the gap on Carrasco in the second inning, with Giancarlo Stanton hitting a one-out home run to bring the Tribe lead down to three. In turn, Tanaka stifled the Indians offense in the bottom, striking out two of the three batters he faced en route to retiring the side in order.

Both Pitchers began to settle in on the mound in the third, with a Ramírez walk being the only offense mounted by either side in the inning.

The fourth inning brought different fortune for Carrasco on the mound, surrendering a lead-off triple to Aaron Hicks, immediately facing trouble. After two walks to follow up the triple loaded the bases on Carrasco, Sandy Alomar Jr. opted to call on James Karinchak to face the jam.

Karinchak, in his first postseason appearance, got caught up quickly as he surrendered the lead to the first batter he faced, allowing a grand slam off the bat of Urshela. After losing the lead, Karinchak walked two more spelling the end of his outing, still with nobody out in the fourth. Phil Maton came on in place of Karinchak to close the inning with three straight outs.
After being gifted the lead in the top of the inning, Tanaka returned the favor in the bottom, retiring the Indians in order to preserve his 5-4 lead.

Maton returned to the mound in the fifth inning, walking Hicks to open the inning, before surrendering a double to Luke Voit to move Hicks to third. In the next at-bat, Stanton hit a sacrifice fly to right field that scored Hicks, while also moving Voit to third. After Urshela reached on a fielder’s choice with the Indians taking the out at home, Gleyber Torres grounded out to end the inning.

Down two in the bottom of the fifth, Lindor started a rally for the Indians offense, opening the inning with a lead-off double. After Tanaka walked Hernández to follow up the double, the Yankees called on Chad Green to come to the mound in relief of Tanaka. Green surrendered a double to Ramírez immediately, scoring both Lindor and Hernández to tie the game at six before three straight outs ended the inning.

Triston McKenzie came on for his first postseason appearance in the sixth, surrendering a lead-off walk to Brett Gardner to open the inning. After surrendering the walk, Gary Sanchez got some help from the wind, hitting a two-run home run to once again give the Yankees the lead. After the home run, McKenzie came back to get three straight outs to end the inning.

In the bottom, Pérez opened the inning with a single to right field, before Naquin struck out for the first out of the inning. Delino Deshields Jr. singled to end the outing for Green with one out in the inning. Zack Britton came to the mound in place of Green for the Yankees, immediately forcing Lindor into a double play to end the inning.

McKenzie came back out to start the seventh inning, walking Voit, before striking out Stanton and Urshela for the first two outs of the inning. Torres reached on a fielding error by Ramírez in the next at-bat that ended the night for McKenzie, with the Indians calling on Nick Wittgren, who ended the inning with a strike out of Gardner.

Britton came back to the mound for the Yankees in the bottom of the seventh, striking out Hernández and forcing Ramírez to ground out to lead off the inning. Santana and Reyes were both able to draw two-out walks that kept the inning alive, before Alomar Jr. opted to pull Naylor for Jordan Luplow, in a head scratching move.

Despite the move being questioned, Luplow delivered a two-out double to center field off Britton’s replacement Jonathan Loaisiga to tie the game at eight. Pérez caught a nasty hit on the wrist from a ball that got away from Loaisiga in the following at-bat, as he was injured on the play. Pérez stayed in the game to run before being replaced defensively, after a Naquin groundout ended the inning.

Wittgren opened the eighth on the mound once again, striking out Sanchez to leadoff the inning, before surrendering back to back walks to LeMahieu and Judge. Despite being threatened, Wittgren worked out of the inning, forcing Hicks to ground out before striking out pinch-hitting Clint Frazier.

Deshields Jr. and Lindor opened the bottom of the eighth drawing walks from Loaisiga, forcing the Yankees to bring in closer Aroldis Chapman. Hernández singled in Chapman’s first at-bat that brought home Deshields Jr. to give the Indians a 9-8 lead. After surrendering the lead, Chapman came back to strike out Ramírez and force Santana into a double play to end the inning.

The Indians called on Hand in the top of the ninth to keep the Yankees at bay and close out the game. However the Yankees had other plans, with a Stanton walk and singles from Urshela and Torres loading the bases with nobody out in the inning. Facing the jam, Hand struck out Gardner for the first out of the inning, before a sacrifice fly from Sanchez tied the game at nine.

In the next at-bat, LeMahieu hit a ground ball single to center field to bring in Urshela to give the Yankees a 10-9 lead. The surrendered lead spelled the end for Hand, with the Indians calling on Cal Quantrill to stop the damage. Quantrill came on to walk Judge to load the bases, before striking out Hicks to send it to the bottom of the ninth.

Desperate to save the season, the Indians had a tough hill to climb, needing at least one run on Chapman in the bottom of the ninth to tie the game and keep themselves alive. However, Chapman got ahead of the Indians, striking out Reyes and forcing Luplow to ground out for the first two outs of the inning.

Facing the final out of the season, Alomar Jr. called on Oscar Mercado to pinch-hit. The Indians’ season hung in the balance as Mercado was able to reach first on a passed ball dropped third strike. With Mercado on first, Austin Hedges came to the plate in place of Naquin for his shot at saving the season.

However, Hedges would go down swinging to Chapman for the final out as the Indians got swept out of the playoffs with a 10-9 loss to the Yankees in game two of the Wild Card playoffs.

Cleveland Gets Embarrassed in Wild Card Series Opener in 12-3 Loss to Yankees
Bieber a Finalist to Win the AL Cy Young, Will the Indians Ante Up with a New Deal This Offseason?