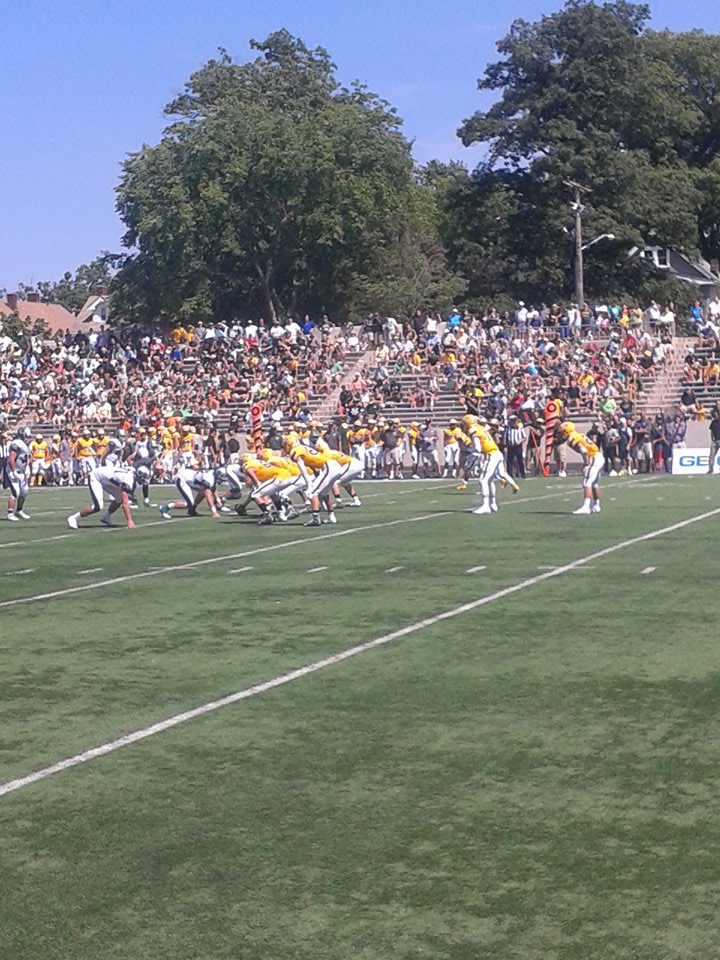 LAKEWOOD– A competitive back and forth ballgame was in store for folks during Saturday afternoon’s football game at First Federal Lakewood Stadium, that had the St. Edward Eagles against the Pine-Richland Rams from Pennsylvania.

To start off the scoring was Notre Dame commit and Junior quarterback for the Pine-Richland Rams, Phillip Jurkovec with an 8-yard pass to Tommy Camino. Which gave the Rams a 7-0 lead with 5:04 left in the first quarter. The St. Edward Eagles immediately answered back next drive with a 31-yard touchdown pass to Kordell Hoover from quarterback Kevin Kramer. Following an extra point the Eagles tied it up 7-7 with 1:14 left in the first quarter. Two plays later the Rams answered back and took the lead when Jurkovec threw a 45-yard touchdown pass to Raymond Falcone .

St. Edward started off the second quarter with the ball and drove down the field which eventually lead to a Curtis Szelesta 4-yard touchdown run. That touchdown run by Szelesta tied the game up with 7:46 left in the first half. With 1:44 left in the first half it was Szelesta once again scoring for the Eagles this time it was a 5-yard run touchdown run, the Eagles took the lead 21-14. The Rams were not done yet though in the first half. After a big 15-yard personal foul penalty on the Eagles that moved the ball from the Rams 32 yard line to the Rams 47 right before halftime, the Rams scored after a Jurkovec 1 yard run. The Rams however missed the extra point and with that St. Edward went into halftime with a 21-20 lead.

The Rams started off the second half with the ball and only needed 4 plays to take the lead back from the Eagles after a 53-yard touchdown pass to Tyler King from Jurkovec. The Rams were leading all of the 3rd quarter with a score of 27-21.

During the 4th quarter the play above looked like it would have cost the Eagles the game, when Kevin Kramer received a bad snap from his center and the Pine-Richland Rams would recover. The Eagles caught a break though as there was plenty of time left in the final quarter for something to happen. St. Edward managed to get the ball back with 3:37 left on the clock. The Eagles drove 80 yards on 5 plays to take the lead back, the drive concluded after a Szelesta 26-yard touchdown run. The Eagles took the lead 28-27 with 1:57 left for the Rams. DeShane Bloodworth intercepted the ball with 1:17 left , which soon secured the first win of the season for the St. Edward Eagles.

For the Pine-Richland Rams:
Philip Jurkovec went 20-31 with 292 passing yards and threw 3 TDs and 1 INT. Jurkovec was also the Rams leading rusher with 20 attempts for 91 yards and scored one rushing touchdown also.
Raymond Falcone had 5 receptions for 114 yards and a touchdown.

Rhodes Blanks Brooklyn 48-0 In The Battle Of Biddulph
Gilmour Academy Holds Off Beachwood, Win It 14-13