Rhodes Blanks Brooklyn 48-0 In The Battle Of Biddulph 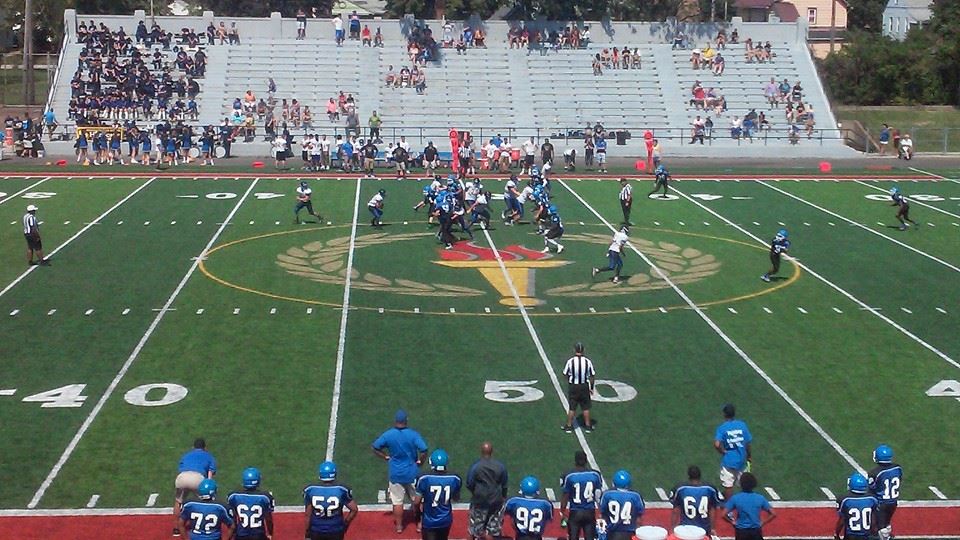 This game report is sponsored by Rain Barrels N’ MORE.

CLEVELAND– In what was a hot day at Rhodes Field, the Brooklyn Hurricanes and Rhodes Rams both looked to claim the inaugural Battle Of Biddulph Trophy.

A very young Hurricanes team definitely had growing pains early and often, as Rhodes controlled the pace of the game.

Junior Quarterback Matt Crossman got the start in place of the injured John Kenderes. Crossman and the offense failed to generate the production needed to have successful drives.

Running backs Jayvon Benton and Jordan Bost-Floyd ran up and down the field at will, both eclipsing the 100-yard mark. 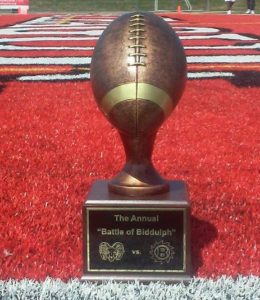 After putting up a 32-0 lead at halftime, Rhodes looked to keep the momentum rolling for the win. The second half looked quite  similar to the first-half performance put up by the Rams.

As the game went on, Brooklyn tried everything they could against the tenacious Rams defense. The Rams’ defense prevailed in the battle today, as Brooklyn couldn’t manage to get across the fifty-yard line for most of the game.

Benton and Bost-Floyd finished off the Hurricanes with rushing touchdowns, as the Rams sealed the deal on a 48-0 victory.

After the game, Rhodes Head Coach Phillip Gary had this to say about Junior Running Back Jayvon Benton:

“We’re just getting to know Jayvon. He’s a good player, obviously. Didn’t get a play last year, so we’re just seeing what he’s got. Obviously he looked good at times today…He’s got some things that he can improve on.”

Jayvon Benton also spoke on his performance and how everything came so easy for him today:

“It’s typical. I give extreme amount of credit to all of my teammates, all twenty-five guys that we’ve got. They put it all on the line for me, opened up the holes for me so I can make plays and I repaid them with a touchdown.”

When asked if this was the best game of football he’s played, Benton smiled.

Rhodes looks to move to 2-0 next week as they travel to Harrison Central, as Brooklyn looks to claim their first victory next week on the road against a very determined Firelands team looking to avenge their Week One loss as well.