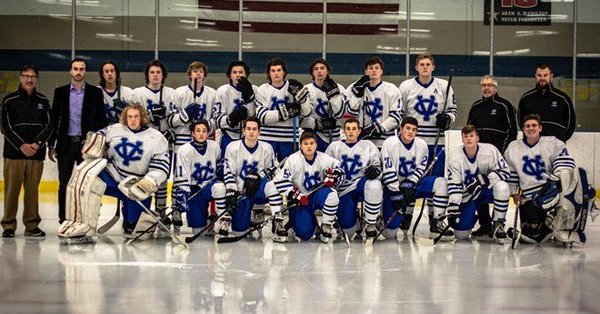 The CVCA Christmas Tourney championship went to the home team on Monday afternoon, as the Royals of CVCA doubled up the Normandy Invaders 6-3.

The Royals built a 5-0 lead with 10:28 to play in the second period, and then Normandy was able to rally to cut it to 5-3 before CVCA’s Christian Beckett scored the Royals 6th goal with 9:24 to play to clinch the win.

Beckett scored three goals on the day, following up the pair of goals he scored in the CVCA tourney win over Lakewood 5-0 on Sunday to advance to the title game.

Luke Perrotta got the scoring going in the first period at the 7:21 mark with Beckett collecting the assist to make it 1-0 Royals.

Beckett scored the next two goals, both in the first period to build a 3-0 lead for CVCA. The first came with 4:03 to play in the first, and second with 3:09 to play.

Both goals were unassisted, the second goal came on a 5-4 power play for the Royals.

The Royals outshot the Invaders 9-4 in the first period, but Normandy would quickly rally to make it a game following two more CVCA goals.

Perrotta made it 4-0 CVCA with 12:45 to play in the second period, and then Jack Perrotta helped out the family tree with a 5th goal for the Royals to make it 5-0 with 10:08 left in the second.

That’s when Normandy finally got their offense going, Brennan Sutton scored first to make it 5-1 with 9:20 left in the second, and then about five minutes later Justin Pierzchala scored to make it a 5-2 game, a power play goal.

Lukas George closed it to 5-3 with 14:40 still to play in the game, giving Invaders the hopes of a comeback after trailing by five.

It was as close as they would get, as with 9:24 left Beckett scored to make it 6-3, with Jack Perrotta earning the assist to put CVCA back up by three.

The same two teams will rematch in a GCHSHL league game at Ries Rink on Sunday, January 6th at 3pm in what should be a great game in the Blue North Division.