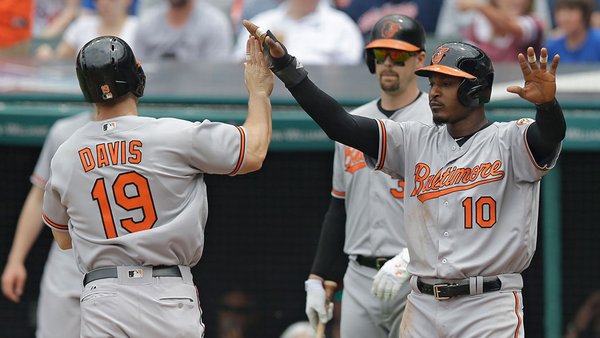 Mike Clevinger made his debut at Progressive Field on Sunday, hoping to rebound after giving up ten runs in 10.1 innings in his first two big league starts.

Unfortunately for the Indians, they saw much of the same from their 25 year-old prospect against the Baltimore Orioles.

Clevinger got off to a wild start in the first when he struggled to find the strike zone before allowing a three-run double to Mark Trumbo. Clevinger threw 32 pitches in the first inning on his way to surrendering the three runs.

Clevinger was sporadic for the majority of his four innings but would allow only one more batter to cross the plate on a sacrifice fly in the fourth. He finished the day with four earned runs on four hits, three walks and four strikeouts while throwing 89 pitches (only 48 strikes) in four innings.

If there is a silver lining to be taken away from Clevinger’s day it would be that he didn’t allow a home run after giving up three homers in his first two outings.

Due to his inability to throw strikes consistently and the amount of runs he has allowed to cross the plate in his three starts at the Major League level, this could be the last time we see Clevinger take the ball for the Tribe in the near future with Carlos Carrasco making his way back from injury.

“I don’t think these three starts are going to define who he is in his Major League career,” Tribe manager Terry Francona said after the game. “I think he’s going to do some really good things. Like a lot of inexperienced pitcher, players, you know, he’s kind of learning on the run right now.”

Home runs were flying out of the park today with five total being hit between the two clubs, three by way of the Tribe.

Carlos Santana lead off the fourth inning with the Tribe’s first hit when he took Orioles starter Chris Tillman deep on the first pitch of the inning for his ninth of the season.

Later in the inning Francisco Lindor would walk following a Jason Kipnis fly out before Mike Napoli deposited his tenth homer of the season to the bleachers in left to bring the Tribe within one at 4-3.

The Tribe tied the game in the fifth on a monster solo shot by Kipnis that nearly cleared the seats in right, his seventh on the year.

Hyun-Soo Kim gave the Orioles the lead back when he hit his first Major League home run with two outs in the seventh. The solo job made it 5-4 Orioles.

The Tribe’s best chance to make their move came in the eighth when Jose Ramirez was intentionally walked to load the bases with one out. Orioles reliever Darren O’Day came on to get Napoli to ground out to third while holding the tying run at third before the walk to Ramirez. O’Day then struck out Lonnie Chisenhall and Yan Gomes to put an end to the threat.

Nolan Reimold gave the Orioles an insurance run in the eighth by hitting a solo home run to left before Zach Britton came on to record his second save of the series after striking out Kipnis and Lindor with runners on the corners.

The Indians lost this one just one day after gaining a half game lead of the Central and lost two of three to the Orioles.

Carlos Carrasco Is “Close” to Rejoining Club; Could Make One More Rehab Start
In Battle of Bullpens, Baltimore Shines While Cleveland’s Blunders Continue