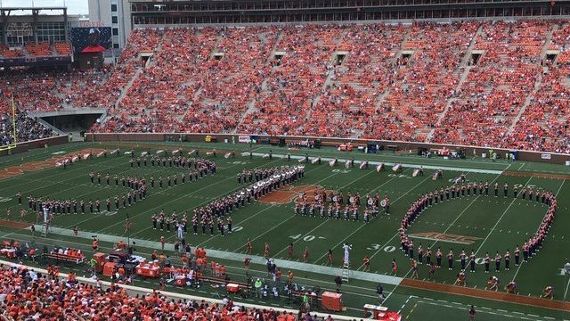 Clearly someone forgot to tell the Clemson Tigers a new season has begun, as they wasted no time reverting back to one last dig at Ohio State.

At halftime of their opener against Kent State today, the Clemson marching band used the opportunity to troll any OSU fans that may have been tuning in with this little dig.

If you recall, it was eight-plus months ago (but clearly still a source of pain for Buckeye fans) when Clemson embarrassed them, 31-0, in the opening round of the College Football Playoffs.

Quarterback Deshaun Watson and the Tigers went on to win the National Championship the next week in a thrilling come-from-behind victory over Alabama.

It should be noted that OSU has appeared to bounce back well from the crushing loss, as they looked impressive during a second half rout on Thursday night during their 49-21 victory on the road against the Indiana Hoosiers.