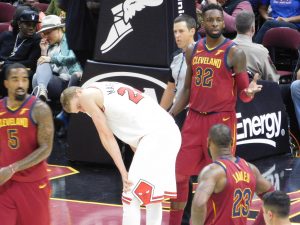 When the Cavs needed them the most, George Hill and Jeff Green could not the fill the void left by Love. The veteran duo combined to shoot 4-of-16 from the field for nine points, six rebounds, three assists and four steals over 57 minutes of action.

Hill has been inconsistent since joining the Cavaliers on Feb. 8, scoring in double-figures on eight different occasions and scoring in single-figures on 12 different occasions. His track record speaks volumes for what he can provide on both ends of the floor, but he has significantly regressed from a career year with Utah in 2016-17: 16.9 points, 3.4 rebounds, 4.2 assists and 1.0 steals over 31.5 minutes per 49 games.

Cleveland is still tinkering with its starting lineups and rotations, a difficult task with less than three weeks remaining in the regular season. Finding a fit for Hill and Green will be an integral part of the roster’s performance.