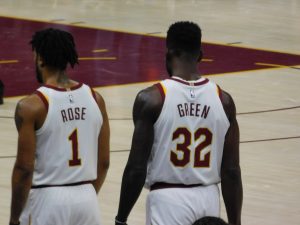 Every time it looked like Philadelphia was going to make a run, the Cavs bench put a stop to it.

They were especially key in the end of the third quarter and the beginning of the fourth as the Cavs would ultimately build a 20-point lead with five minutes to go.

The bench combined for 57 points, led by Wade with 15 and five assists, as well as Jeff Green with a double-double behind a 14-point, 10-rebound effort. Channing Frye missed just one shot all game and ended with 12 points.

In order to get to eight straight wins, the Cavs have continued to click in all of the most important areas. Monday night was just the latest instance of them doing so.

Trading For A Disgruntled Marc Gasol Would Be The Best Move For Cavaliers
HS Bowling: North Olmsted Eagles finish in 3rd place at the 2017 Ravenna Ravens Invitational.