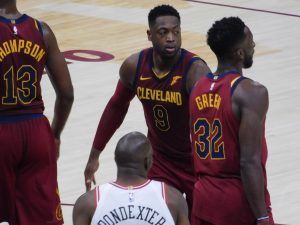 The Cavs were able to convert on plenty of their defensive plays, ending with 15 fast break points and 21 points off of turnovers.

Overall, however, they have continued to have shared success offensively.

They continued to get good looks and easy baskets due to their great spacing and ball movement that is a product of their motion offensive sets. As a result, they had 25 assists compared to just 15 for Philadelphia.

There were plenty of key moments throughout the game, such as when James scored nine straight in the opening quarter to erase Philly’s 6-0 lead. There was also his buzzer-beating trey from the corner just before halftime when he hoisted a shot with just under 4 seconds left that missed, and chased down the rebound right in front of his own bench before turning to get off the last-second heave from the baseline.

LeBron couldn’t have missed the first shot any better ? (via @cavs) pic.twitter.com/04e9mwID5Z

There was also Smith nailing three 3-pointers in the third quarter to keep ratcheting up the Cavs lead.

And in the middle of every stellar offensive play, there was the bench pushing at pivotal moments.

Trading For A Disgruntled Marc Gasol Would Be The Best Move For Cavaliers
HS Bowling: North Olmsted Eagles finish in 3rd place at the 2017 Ravenna Ravens Invitational.