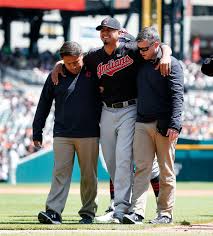 News broke Monday afternoon that Indians Starting Pitcher Carlos Carrasco will be out 4-6 weeks with a hamstring injury.

The good news is that Michael Brantley returns to the lineup this week in Minnesota, but as for the starting rotation, Trevor Bauer will have to step up and try to hold down the fort until Carrasco returns.

It’s an especially significant opportunity for Bauer because Cody Anderson has been struggling, so when Carrasco does return, if Bauer puts together some good outings, he could possibly regain his position in the rotation.

Cleveland managed to stay above .500 with a record of 9-7 without Brantley. Let’s see how they manage without their #2 starting pitcher over the next several weeks.