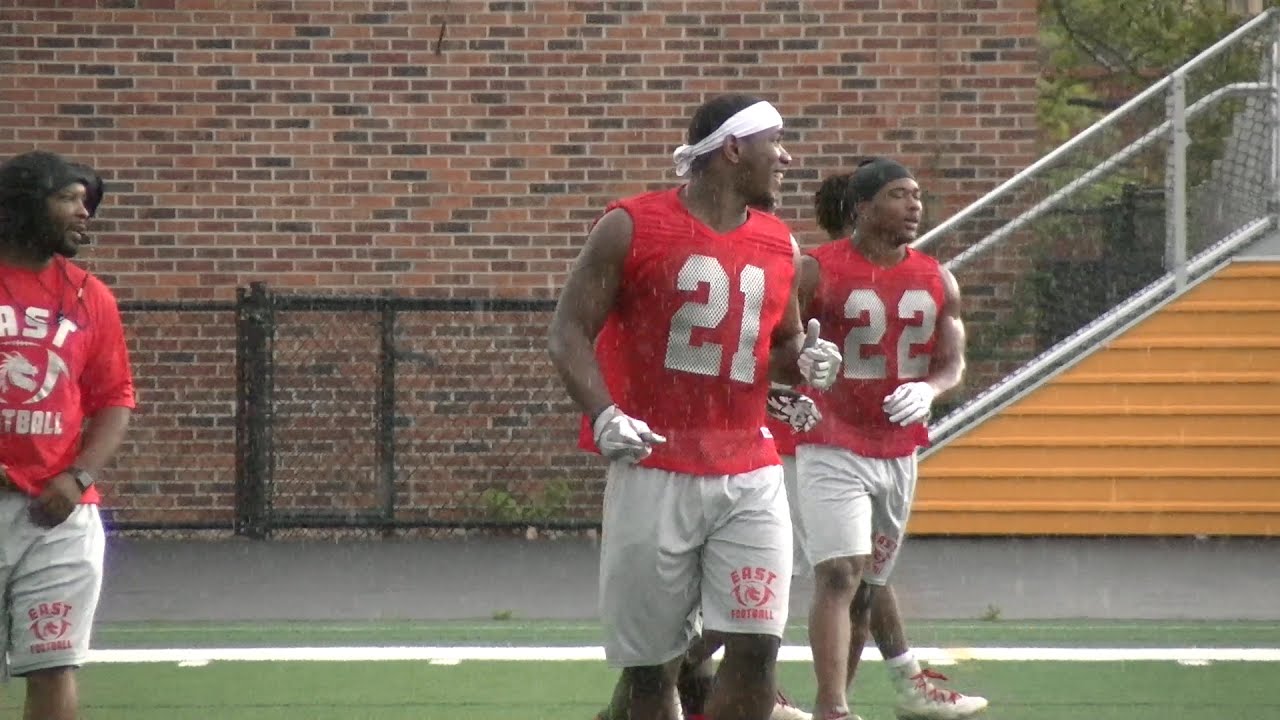 It wasn’t a pretty ending to the game and this game didn’t feature an aerial assault from either team. However, there were riveting runs and the type of defense being played — even on special teams — that made Friday night’s matchup between the Buchtel Griffins (6-3) and East Dragons (7-2) an exciting affair. With the East Dragons playing at home, the two teams would meet at the University of Akron’s InfoCision Stadium.

East has had three shutout victories this season already. So before playing Buchtel, who had two shutout victories of their own, both teams already knew they were going to have to fight for every yard when the ball was kicked off.

Still, the Buchtel defense managed to prevent the Dragons from reaching a first down on their first three attempts of the ensuing possession. East had the ball on fourth down. However, instead of kicking the ball for a field goal (both teams seemed to have a disdain for field goal attempts), the Dragons called a run that went for a touchdown.

That strong run by runningback Devanier Floyd, one of many that the Dragons would have, would be East’s first and only touchdown until the fourth quarter.

Buchtel themselves would score on a fourth down conversion with McGinnis throwing a touchdown pass after a squib kickoff and a 20-yard return set them up with good field position. Once at the 45-yard line, McGinnis drew a pass interference call that put them on the Dragon’s side of the field. McGinnis, who would be sacked on third down and fumble the ball for a second time (recovered by Buchtel), threw his second touchdown in the second quarter. After a missed extra point attempt, the Griffins were down 7-6. (a trick play by Buchtel resulted in a touchdown through the air but was called back by penalty).

Before the half, the Dragons looked like they would score after a drive that started at their 12-yard line after a 33-yard scamper and 24-yard run on 4th & 1 led them into the opponents red zone. Unfortunately, a great drive would end in a turnover on downs after a sack. From there, McGinnis would throw a pass that brought the Griffins 45 yards upfield to the opponents 37-yard line. After a couple of short runs, McGinnis threw a touchdown pass on 3rd & 1 from the 34-yard line.

The Griffins would lead 12-7 after a failed two-point conversion.

While the third quarter was filled with penalties, two partially blocked punts, more of that strong defense and a trick play for Buchtel that resulted in a touchdown (it was immediately called back with a flag), the fourth quarter started off with a bang as a 48-yard touchdown run by the Dragons put them up 13-12 with 10:30 left in the fourth quarter after East missed an extra-point attempt.

Unfortunately, the Dragons’ joy would be short-lived as a long punt return by Buchtel and a scamper by McGinnis put the Griffins in field goal range where they would ultimately come up successful and win 15-13.