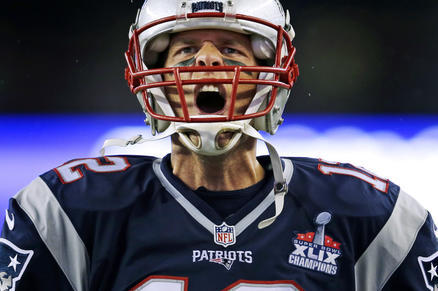 Tomorrow is the return of the New England Patriots quarterback Tom Brady and his first test of the season in down at First Energy Stadium as the Patriots take on the Cleveland Browns.

Brady hasn’t had much trouble when it comes to beating the Browns. In six games against Cleveland, he’s put up 132–198 for 1,541 yards 8TD, 4INT, 85.1 rating while only losing once. The general feeling is that Brady will be playing “pissed” after his four game suspension and he is going to take it out on that young Ray Horton defense. Rookie DE Carl Nassib looks to return to the Browns after breaking his hand in week 1 but things are looking optimistic for a comeback.

The Browns currently lead the league in rushing offense behind the versatile RB duo of Isaiah Crowell and Duke Johnson Jr. with 149.3 YPG, 597 yards, 5.7 YPA, and 4TDs, however, they also have 11 fumbles which is 2nd in the league behind the Patriots who have 12. They also have averaged just 4.2 points during the 2nd half of games through the first four games. QB Cody Kessler continues to look like he’s catching on to the starting role and looks to improve off of his game last week when he recorded his first career passing TD to WR Terrelle Pryor who also recorded his first receiving TD.

While Crowell has the 2nd most rushing yards through 4 games with 394 yards, Patriots RB LeGarrette Blount sits in 3rd with 352 yards.The more impressive stat is he has averaged an insane 6.5 YPC. There’s no doubt that Bill Belichick has begun game planning around limiting Crowell on ground. The Patriots, have been inconsistent against the rush. At times, they haven’t been able to properly tackle players and it has led to extra yards.

Browns head coach Hue Jackson is excited about the match up but still know what the Patriots can do.

The last time the Patriots came to Cleveland in 2010, the Browns surprisingly upset the juggernaut New England offense 34-14. It was the Patriots second and last loss of that season. We shall see if home field advantage will help the Browns this time around.