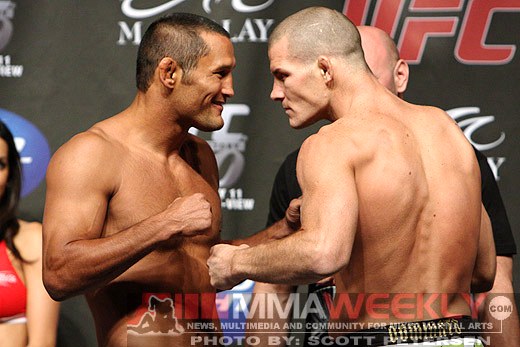 ENGLAND – We are live from UFC 204 in Manchester, England and are all set to bring you live results of the main card all night!

The card starts out with Brad Pickett getting submitted quickly by an impressive Iuri Alcantara. Iuri dominated the entire fight, just over a minute long before ending it on top with a triangle choke from the mount to win it.

Russell Doane got choked out quickly by Mirsad Bektic in a match so quick if you blinked you missed it.

Up next it was the Sky Scraper Stefan Struve using a strong chin to survive the first round before rallying in the second to shock Daniel Omielanczuk with a Darsh choke to earn the submission win.

OVP gets rocked and knocked out cold in devastating fashion by Jimi Manuwa! Wow, no chance anything replaces that as knock out of the night!

After an even first round, Gegard Mousasi dominates Vitor Belfort for an impressive second round knockout. Mousasi is now firmly in the title hunt!

The Main Event of the evening was an instant classic.

RND 1 – Henderson nearly ends the fight midway through with a powerful right hand that floors Bisping. Hendo then spends the rest of the round pounding Bisping before he is saved by the bell.

I scored the round 10-8 Henderson

RND 2 – It was four minutes of Bisping striking not doing too much damage, before Henderson rallies late with another vicious knockdown and nearly finishes Bisping again before the clock saves him.

I scored the round 10-9 Henderson

RND 3 – Not a ton of action, but Bisping looks a lot fresher and more active then Henderson despite the early beating he took. This round is all Bisping.

I scored the round 10-9 Bisping

RND 4 – This one goes almost the exact same as round 3.

RND 5 – Not much action through the first four rounds, before Henderson shows some steam late with a takedown. Henderson does enough to steal the round.

I scored the round 10-9 Henderson.