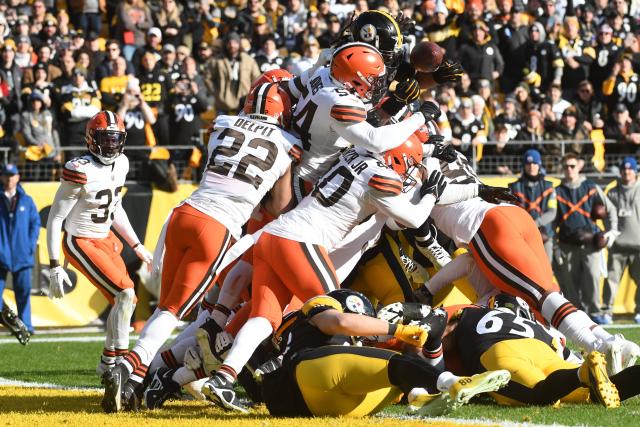 The Browns did their best to end the season on a high note but sadly will have to sit with the taste of defeat in their final contest of the season. In a game that saw very little promise on the offensive side of the football, were unable to put a final victory in the win column. The Cleveland Browns finish their 2022-23 season with a record of 7-10.

The first quarter of the game saw a total of three Browns possessions all of which resulted in punts. The Steelers had two possessions the first of which brought them all the way down to the one-yard line. Najee Harris on first-down dove for the goal line and appeared to make it into the endzone. However, he was marked short. Second down Kenny Pickett kept it himself and was stopped short of the goal to gain. On third down Najee Harris leapt over the offensive line to try and get the ball over the goal line but lost control of the football. Browns recovered the fumble.

The Browns were able to get on the board first after a ten play seventy-one-yard drive. The drive was capped off with a ten-yard touchdown pass from Watson to Njoku. The Browns touchdown drive was followed up with a Steelers touchdown drive of their own. The drive took nine plays and seventy-five yards and ended with a thirty-one-yard touchdown pass from Kenny Pickett to George Pickens. With a little less than a minute and a half in the first half Deshaun Watson was picked off by Steelers cornerback Levi Wallace at the Pittsburgh forty-one yard line. The Steelers were able to get within field goal range on their final possession of the half. Chris Boswell put the field goal in from the forty-nine-yard line and gave the Steelers a 10-7 lead going into halftime.

The third quarter started with a twelve play fifty-nine yard drive from the Pittsburgh Steelers. The Steelers ultimately had to settle for a thirty-four-yard field goal which gave the black and yellow a 13-7 lead. The Browns followed up the Steelers field goal drive with a six play thirteen-yard drive. Unfortunately, the drive was cut short after Deshaun Watson threw his second interception of the day. Following the turnover, the Steelers capitalized by putting seven more on the board. The touchdown came from a Najee Harris four-yard touchdown run, and extended the Steelers lead to 20-7 with just over three minutes left in the third quarter. The Browns final possession of the third quarter ended in another punt.

The Browns first possession of the fourth quarter was a seven play seventy-two-yard drive that was capped off with a Nick Chubb receiving touchdown.

PPR Fantasy Players might be upset with this one. pic.twitter.com/casQyy5coE

The Browns will have to make some tough decisions this off-season. It sounds like there will likely be changes to the coaching staff, and there are plenty of players who will likely not be retained in free agency. “There’s always next year” has become an all-too-familiar slogan for Browns fans, but hopefully next year will yield a different result and finish on a much higher note.