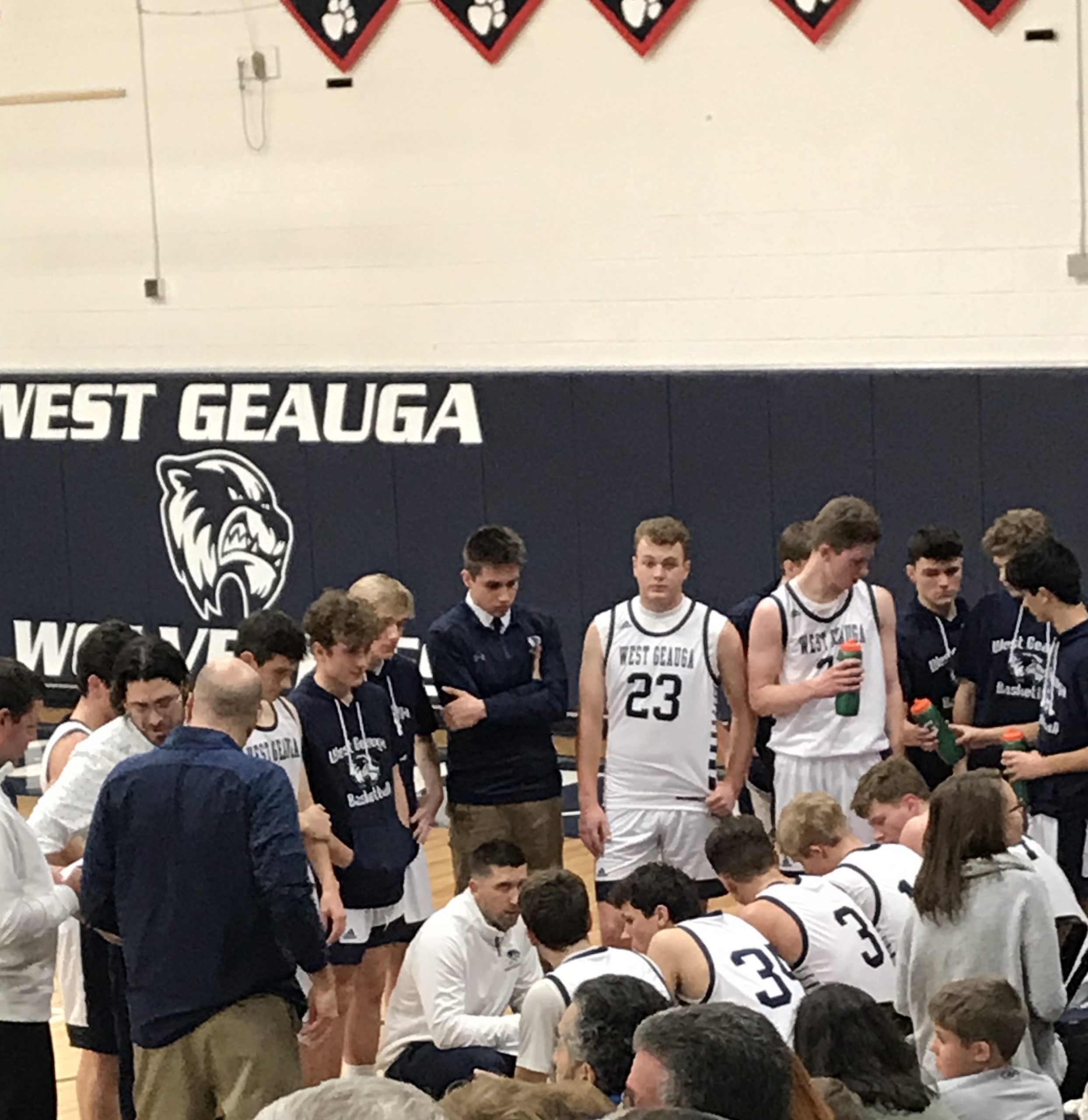 CHESTERLAND, OHIO – The West Geauga Wolverines took down the NDCL Lions 56-50 Tuesday night at their home court. The game was as tightly contested throughout as the final score displays.

Both teams began with a defensive affair during the first quarter, ending the initial eight minutes with a low scoring 14-12 game that saw West G jump out to the early lead.

However, NDCL climbed back to end the first half up 24-22. For the majority of the second quarter, each made bucket meant a lead change among the squads.

West Geauga’s small gymnasium provided an electric atmosphere that was promulgated by a physical matchup all night.

Students and parents of both schools packed into the small gymnasium Tuesday night, as the two schools are separated by just a 13 minute drive.

The second quarter began with a scoreless two and a half minutes, marred with steady defensive stands and a handful of turnovers from either side.

The silent streak was broken when Wolverine guard Peyton Bissler landed a floater.

Bissler was able to notch 22 points in the game, but did not finish as the highest scorer for Jeff Javorek’s Wolverines.

The offense ran through he and junior big man Josh Irwin who remained a strong presence on defense in the paint and was able to knock down a three pointer in each quarter, ending with a double double of 20 points and 14 rebounds.

Javorek made sure the plays that were run gave the senior and junior ample opportunities to shoot, and was rewarded when they combined for more than half of the team’s overall points.

Despite finishing strong, the Wolverines were unable to find the bottom of the basket during the second quarter, finishing out the half behind the Lions with just 30 points.

Coming out of halftime, both teams seemed to still be warming themselves back up from the mid-game cool down.

The first three minutes of the third quarter, much like the beginning of the second quarter, went scoreless.

The physicality remained in the second half, with both teams fouling themselves into the bonus before the fouling to extend the end of the game commenced.

However, West Geauga had control of the pace during most of the third quarter, settling in after a back and forth first half.

NDCL slowly climbed their way back to West G, staying within striking distance until the very end thanks in part to Danny Gatto’s 13 second half points.

The difference in the final minutes going down the stretch was that West G’s shots fell while the Lions’ shots did not.

For the Lions, both Frank Martin and Dane Berschig finished with 14 points, but the sharing of the ball for NDCL was not enough to overcome the now experienced Wolverine team.

Notre Dame head coach Nate Vander Sluis must get his eight seniors on the same page if he wants to right the ship moving forwards.

The last two minutes of the fourth quarter saw the score jump from a 30-24 West G lead to the third quarter ending with the Wolverines up 40-34.

No comeback that NDCL was able to amount would put them ahead of West Geauga who took control of the second half.

NDCL looks to rebound after a tough loss and look for their first win of the season Friday night at home versus Holy Name.

Meanwhile, West Geauga will look to build off their opening day win with their next game against Orange.