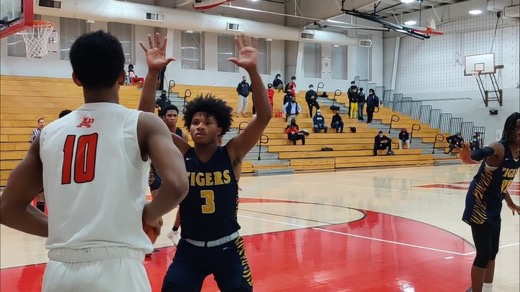 Despite the 28 turnovers the Tigers gave up, they found a way to come out with a 85-82 victory over the Red Raiders in overtime.

“I’m happy that we won, but I’m not satisfied at all with that,” Tigers’ coach Brian Swift said after the game.

I think we left a lot on the floor. I gotta tip my hat off to Shaker (Heights). They were hungry… They fought to the end.”

The Tigers lead 57-54 going into the fourth quarter.

Their press kept them in the game, by forcing turnovers and turning into points on the other end. Junior Danny Young was one of many players that made the press work for Shaker Heights, but he stood out with six steals and scored 35 points.

His scoring kept the Raiders in the game as he made the game-tying free-throws with .3 seconds left in regulation to force overtime.

The fourth quarter was a true battle for both sides. The Tigers had the lead for almost the entire quarter, but the Raiders were always one possession away from tying. Young scored 11 points in the quarter.

The Tigers scoring was a team effort as they had five players score at least 10 points.

Jayden Hameed had 11 points, Ramelle Arnold had 13, Jamarion Johnson had 13 , Terrion Ellis had 16. But, the leader was Tyishawn Smiley with 25.

“I told (Smiley) before the game started, that today, he should have at least close to 20 (points) if not more,” Johnson said

“They are not a tall team. Smiley is very tall and aggressive.”

After Young sent the game into overtime, the Raiders took their first lead since the third quarter. But it was short-lived as the Tigers scored four quick points off free-throws and a basket from Ellis.

Shaker Heights took the lead again by making their free-throws, but was once again responded with a run by Warrensville Heights to close out the game.

Coach Swift recognized the turnovers after the game and is determined to get it fixed.

“With guys like Ramelle (Arnold) and Jaden (Hameed) on the court. I think that we should be better with handling the ball,” he said.

I think we should be able to handle the pressure a little bit better than that and that is one area of improvement [for the team.]”

In the win, the Tigers did not attempt a lot of threes as they went 2-for-6 from beyond the arch. Warrensville Heights also held a firm 35-22 rebounding advantage over the Raiders.

Both teams will play their next games on Tuesday, Jan. 8 as Warrensville Heights go on the road to face Maple Heights and Shaker Heights will host Bedford.

Boys HS Hoops: SVSM Grinds Past Cleveland Heights 69-37 in a Game of Runs
Boys HS Hoops: Mentor Plays With a Chip on Their Shoulder, Tops Medina 76-65