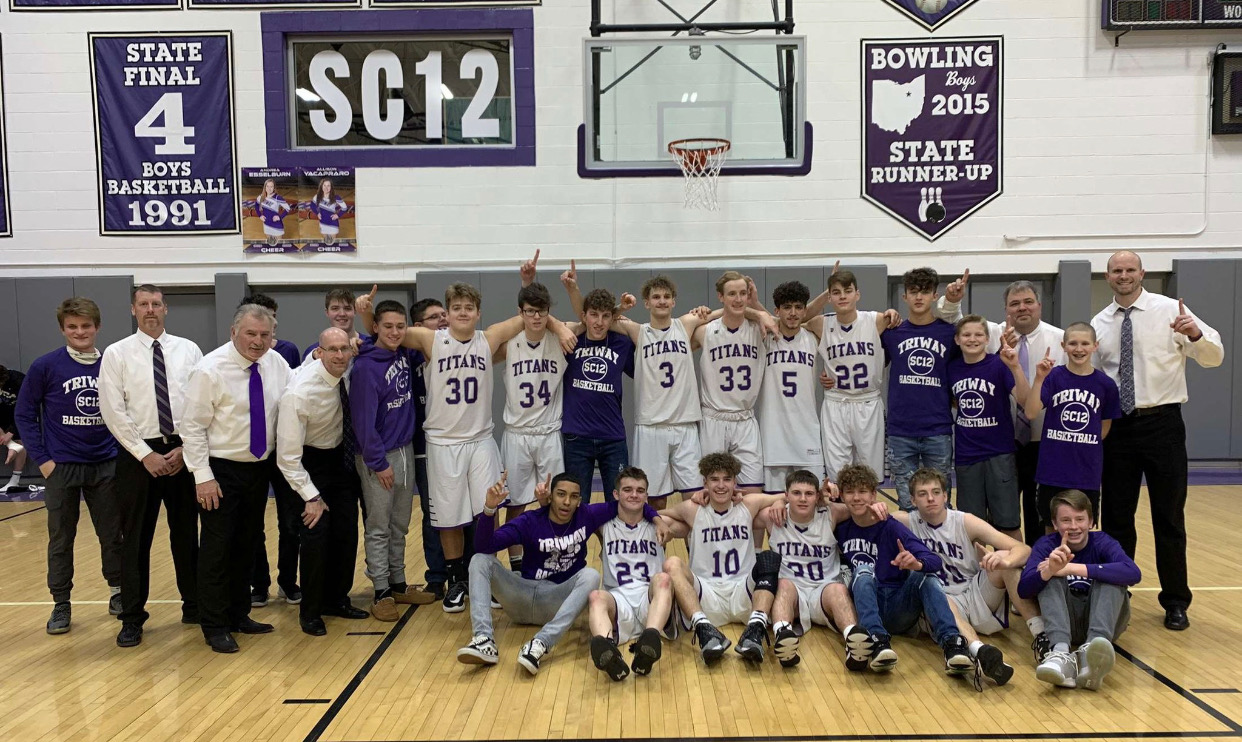 WOOSTER, OHIO – When Triway met up with CVCA in January, they barely edged the Royals for a 45-43 victory.

This time around, it was a much different result.

After the first quarter, it appeared that the fans at “The Pit” were in for an exciting defensive battle between the top two teams in the PAC-7. The score was 10-4 in favor of Triway, as their suffocating defense was present from the opening tip.

After that point, Triway pulled away and never looked back.

Triway’s defense, a defense which had only allowed 44.8 points per game coming into tonight, held CVCA without a single field goal in the second quarter. Chance Wells, the leading scorer in Wayne County, had his way on the offensive end to really shut down CVCA’s title hopes early on.

Wells finished the first half with 15 points, as his Titans carried a 30-8 lead into halftime.

Triway won their last meeting with CVCA by two points earlier this season, but dominant defense has propelled them to a large lead. pic.twitter.com/3KqRZRh1gV

With a comfortable lead, head coach Ben Holt elected to rest his leading scorer for most of the third quarter. While CVCA was able to keep the second half a little more competitive than the first, Triway continued to roll in front of their home crowd.

The fourth quarter was slow paced and low scoring, as many of the starters had migrated to the bench for the evening. The game ended with a standing ovation and a 58-30 victory for the Triway Titans.

Tonight’s victory by Triway was the most dominant I’ve seen this season!

The Titans claim the PAC-7 title in runaway fashion in front of their home crowd at “The Pit”. pic.twitter.com/ul6tGl0wMT

Triway ended their night with a thrilling locker room celebration involving both players and students, as the Titans clinched the first PAC-7 title since 2007 with the victory.

Triway has dedicated their season to Sean Carmichael, with the phrase “SC12” all around the gym.

Carmichael was “Mr. Triway” as head coach Ben Holt told The Daily Record last year. He was a longtime athletic director for the school district, and had also served as head baseball coach and assistant basketball coach.

Carmichael suddenly passed away at the age of 52 just a few months before the start of this season. The Titans have been incredible this season, and the inspiration from the late Sean Carmichael has been a driving part to their success.

Triway improves to 18-2 and will close the regular season next Tuesday at home against Waynedale.

CVCA drops to 15-5 and will also be in action next Tuesday when they host Canton South.