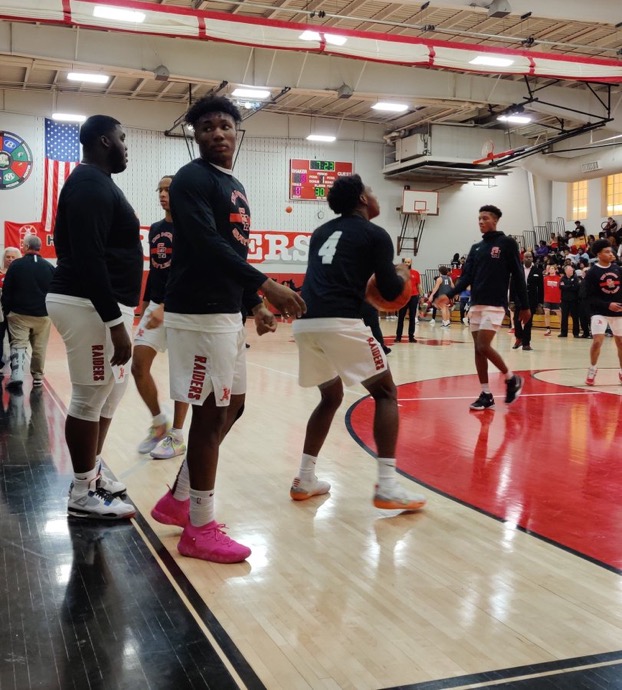 SHAKER HEIGHTS, OHIO – The Mentor Cardinals were in second place in the GCC before they took on the third place Shaker Heights Red Raiders.

It took all 32 minutes for them to prove that they should not be placed any lower after their 83-79 win over Red Raiders to secure the season sweep in what Mentor coach Bob Krizancic called a “playoff atmosphere.”

“[The win] took 32 minutes of toughness. Especially at the end of the game,” Krizancic said.

“We didn’t try to give it away at the end of the game. There were some bad possessions. But, I thought that you want (Luke) Chicone shooting the free-throws (at the end). (Luke) Floriea did a great job overall at the free-throw-line.”

Under the coaching of Krizancic and the three years they’ve played together in Mentor red, they have molded into one of, if not the best backcourts in Northeast Ohio.

Against Shaker Heights was another example as Chicone had 13 points (fourth) and Floriea led the Cardinals with 26.

The third leading scorer was Andrew Witte, who had a career-high 14 points and was their scoring engine in the second quarter, despite the Red Raiders dominating the boards 16-6 in the first half.

The biggest factor (in the second quarter) was Witte knocking down threes and making all of his shots,” Floriea said about his teammate.

“It was big for him, because they were both focusing on me and (Chicone) and Chad (Rogers) more. Having him step up and knock down shots were huge.”

He scored 11 points in the quarter, three three-pointers and one two-pointer. He hit another three in the fourth quarter and did not miss a shot the entire game.

The Cardinals also took care of the basketball in the first half as they committed one turnover.

“Usually, we are trying to get two runs per half,” Krizancic said.

“That’s been our MO. If we get two runs per half, we half to keep (the lead).

Their best run was yet to come as they went on a 14-2 run at the end of the third quarter.

The run was capped off with back-to-back three-pointers in the last 10 seconds by Kyle Culler and Floriea to give them a 65-56 lead entering the fourth quarter.

“I saw the ball rolling around. Somehow, it ended up to me. I was at the top of the key. There were three seconds left. I’m just going to fire this thing away. It was a big confidence-booster going into the fourth quarter.”

Rogers had nine points in the third quarter. He finished with 21 points, two rebounds, two assists, and four blocks.

Mentor did a better job grabbing rebounds in the second half compared to the first as they trailed 13-9 rebounds compared to 16-6 in the first.

Shaker Height’s Dakota Cochran had six points in the first half, but scored 17 in the second to finish with 23 points.

Cochran posted up against Witte got him going early in the third quarter. After scoring in the paint, his threes started falling to help bring the Red Raiders back in the game along with Shammah Scott’s nine points as well.

The Medina Bees defeated conference opponent Elyria 65-59 to keep the GCC lead, but Mentor is right behind them with the same conference record (11-2). Shaker Heights remains in third.