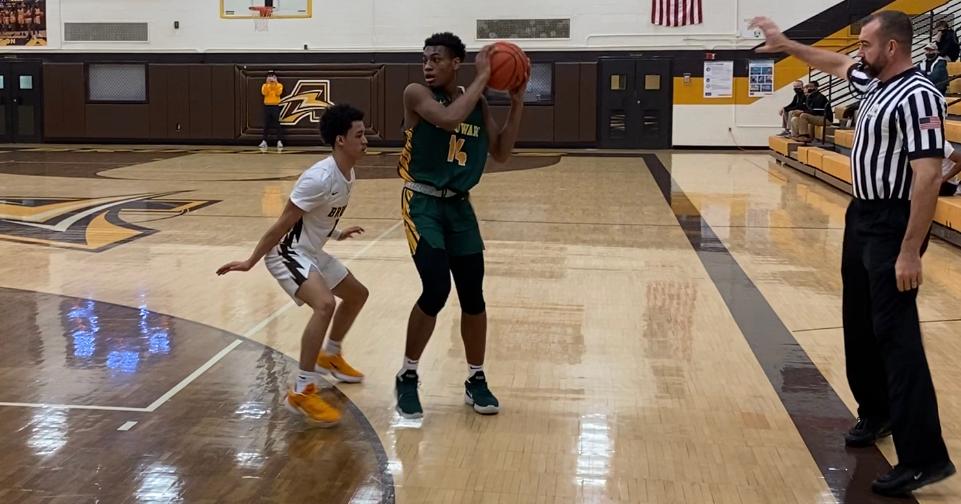 LYNDHURST, OHIO — Elmore James pieced together another incredible performance for Brush, scoring 17 points in the fourth quarter and 36 in the game.

Unfortunately for the Arcs, that performance still wasn’t enough.

St. Edward was able to hold off a big fourth quarter comeback to earn a 68-64 victory over Brush Tuesday night.

Despite the Eagles leading by double digits at one point, this game was all Brush early.

Hot shooting from beyond the arc fueled Brush to an 18-12 lead after the first quarter.

Hot shooting from beyond the arc propels the Arcs to a lead.

Shane Macalla, who finished the game with a team high 20 points, was a steady force throughout the game. He led St. Edward on a 10-3 run in the second quarter to give the Eagles their first lead.

Leading 30-29 at halftime, St. Edward began to extend their lead in the third quarter.

A quick pair of fast break buckets by Michael Bova gives St. Edward their largest lead of the game at 42-35.

The Eagles led by as much as 11 in that third quarter, eventually getting out to a 48-40 lead with a quarter to play.

Elmore James had a huge fourth quarter, as he was able to keep Brush within striking distance.

With 1:30 left, trailing by seven, Brush began to fight back.

James, who finished with 17 points in the fourth quarter, hit several big shots to close the gap to 66-64 with 8.7 to play.

Elmore James AGAIN! Brush has cut the deficit to 66-64 with just 8.7 in regulation.

Ed’s ball out of the timeout. pic.twitter.com/Jj0Qgta6rW

However, Mason Lerch was able to go 4-for-4 from the line down the stretch, securing a tight 68-64 victory for St. Edward.

Elmore James could be in the conversation for Ohio Mr. Basketball this season. Despite an 0-3 start for Brush, James is averaging 33.3 points per game.

For St. Edward, their balanced scoring effort was led by Shane Macalla. Macalla didn’t have more than seven points in any quarter, but he provided a steady stream of points, finishing with 20 on the night.

Brush (0-3) will next be in action this Friday, as they are scheduled to host Notre Dame-Cathedral Latin.

St. Edward (3-0) will also be in action this Friday, visiting Benedictine for another big clash.