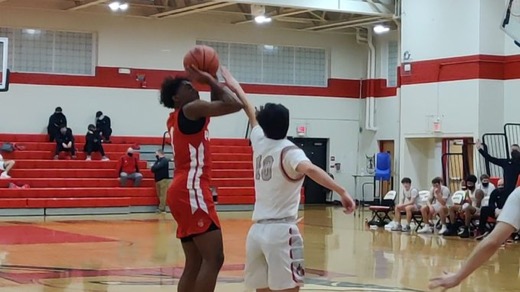 FAIRVIEW PARK, OHIO – Allan Eason and the rest of Parma took a while to get in rhythm against Fairview.

Timeout Parma after Eason makes a 3-pointer. They extend the lead to49-43 late in Q4.@FPWarriorSports @ParmaHighSports pic.twitter.com/bZ0HFNXM4a

“He can go inside. He can go outside. Allan (Eason) does it all for us, but he is a fine teammate that finds open players as well. He reads the defense greatly… He knows when to get going, he knows when to get teammates involved. He is a very spectacular player all around.”

From an efficiency standpoint, Eason was 8-of-10 from the free-throw line, 6-of-10 from beyond the three-point line, and shot 9-of-17 from the field.

His 32 counted for more than 60 percent of his team’s scoring and also grabbed six rebounds.

Reed stepped up for the Redmen as he scored eight points in the fourth quarter and was a part of the defensive effort with two steals.

“He did everything we could ask. He played great defense, when he was open for three, he knocks them down… We missed a lot of (single-bonus free-throws). Keith (Reed) came to the line, shot two and knocked them both down.”

The defense for Parma was a team effort and Durkin was proud of the way his players played on that end of the court to balance the cold shooting.

“Shots were just not falling [early in the first quarter],” he said.

“We knew that shots were going to fall eventually, but what I think helped us stay alive, [was because of] our defense. I think the defense sparked us and allowed us to eventually get into a rhythm.”

The Redmen shot much better in the second quarter as they had the lead for almost the entire period. The team shot 7-of-11 from the field.

After they went on a small run in the beginning of the second quarter, Fairview matched their offensive efficiency and even took the 26-25 lead before halftime as Parma committed a late foul to send Tyler Holiday to the line and split free throws.

“They can shoot the ball from anywhere and they can also get to the rim. They also play very good defense. They get into gaps and they listen to their coach.”

The third quarter was more defensive than the second quarter, which resulted in the Warriors extending their lead to 39-37 at the end. Fairview went on a 7-0 run.

The top scorers for Fairview were Ethan McQuate (15 points), and Danny Hanton (14 points).

Here is the scorebook for Parma's 57-54 win over Fairview. pic.twitter.com/kCUedwmQky

This win halts a two-game losing streak for Parma and will hope to even it out as they will face current league leading Lakewood on the road on January 26. Fairview will also go on the road to face Strongsville on January 23.