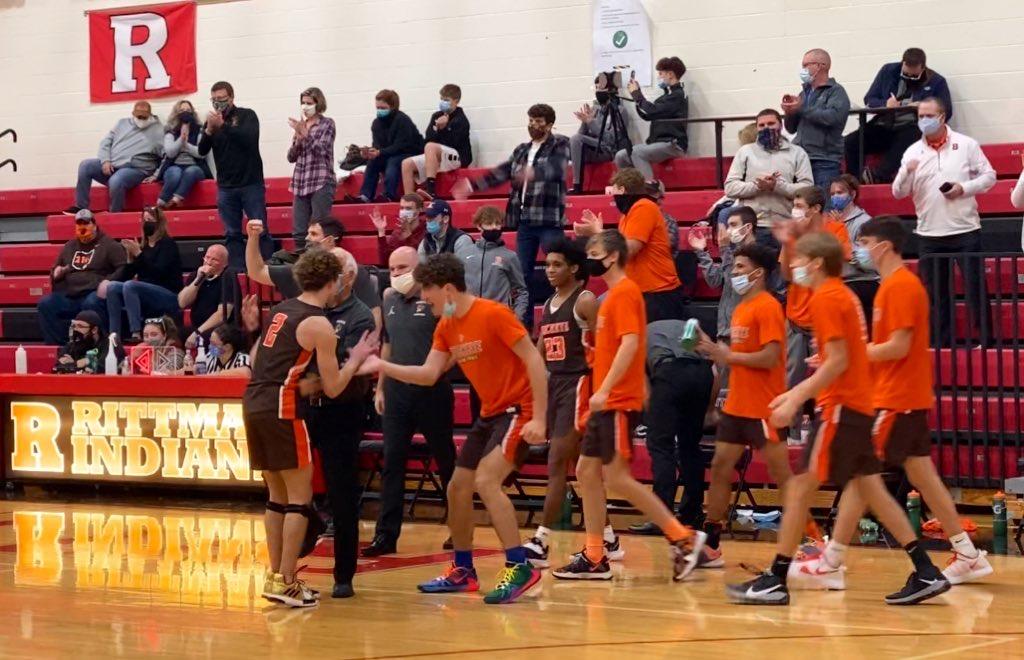 RITTMAN, OHIO — Danny Flood may have been unusually quiet for most of the game, but he made his presence felt when it really mattered.

The junior connected on a pair of three pointers in the final seconds to send Buckeye to overtime, where they would pull away to beat Rittman 69-61.

It was the Nick Miller show throughout the game, as the junior scored nine of his 27 points in the first quarter. Buckeye jumped out to a 16-11 lead after the first.

Nick Miller off to a hot start for Buckeye, scoring 9 points including this and-1 bucket. 🎥 ⬇️ @BHSAthDep @RHSRMSNews pic.twitter.com/Xgm6WC8vE0

Rittman would fight back in the second half, taking a 32-31 lead behind an 11 point half for Braden Metheny.

It was a back-and-forth affair in the second half before a 15-5 fourth quarter run fueled by Nick Swartz gave Rittman their largest lead of the game with just under a minute to play.

With Buckeye trailing 59-53, a “Flood Warning” was issued at Rittman High School.

Danny Flood connected on a three pointer to cut the lead to 59-56 with 23.9 in regulation.

Then with just seconds on the clock, Flood stole a Rittman inbound pass and connected on a game tying three-pointer to send the game to overtime at 59-59.

DANNY FLOOD! A wild sequence ends in a game tying triple for Buckeye, and we are going to overtime. @BHSAthDep @RHSRMSNews pic.twitter.com/49LSO4ig42

Flood had just four points in the game before scoring six in the final 23 seconds.

With momentum in their favor, Buckeye outscored Rittman 10-2 in the overtime period to secure a 69-61 road victory on opening night.

Buckeye is a young team, with only two seniors on their roster. However, the trio of Danny Flood (junior), Nick Miller (junior), and Caden Hudak (sophomore) rival the best in the area.

These three combined for 61 of Buckeye’s 69 points in the victory.

Buckeye improves to 1-0, and will be off until Friday, December 4th when they host Bay.

Rittman drops to 0-1 on the young season, and will host Kidron Central Christian next Tuesday.