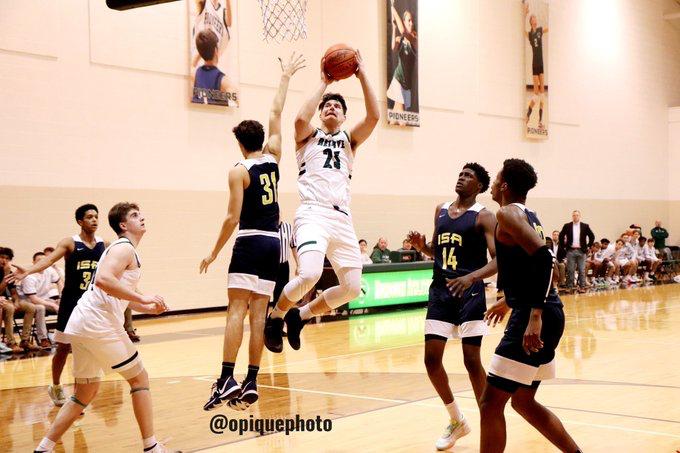 The early portion of the game went according to plan for ISA. They would hold 5-star sophomore Chris Livingston scoreless in the opening quarter, while dominating on the offensive end. Columbia offeree Andy Barba and Duke offeree Charles Bediako led ISA on a 15-0 charge that would put ISA ahead 24-5 after one quarter.

ISA has completed 4 alley-oops in the opening quarter, this one to Duke recruit Charles Bediako. @isa_basketball @NEO_Spotlight pic.twitter.com/i6XekSKUNi

Andy Barba with the POSTER! ISA at Andrews Osborne leads WRA 24-5 at the end of the opening quarter. 🎥⬇️@isa_basketball @NEO_Spotlight pic.twitter.com/zWEHThrdCC

With a potential blowout looming, WRA would respond in a big way.

Senior forward Dimitrije Radusinovic was the star of the second quarter, as he scored the majority of his 21 in the frame. The fiery forward did not back down to anyone, as he would cap off the first half with a gritty finish over 6’8 Alabama commit Keon Ambrose. WRA outscored ISA 20-8 in the second quarter, cutting the halftime deficit to 32-25.

Dimiitrije Radusinovic takes over the second quarter, pulling WRA within single digits heading into the break.

WRA would continue to battle in the third quarter, cutting the deficit to two points. After a quiet first half for Livingston, the Buchtel transfer kept his Pioneers within striking distance. However, Ambrose and sophomore guard Jaden Clayton would piece together strong performances in the third quarter to maintain a 48-43 lead with eight minutes to play.

Chris Livingston (5 ⭐️) buries a triple, and WRA has cut the ISA lead down to 40-38! Great comeback by the Pioneers. @WRA_Hoops @NEO_Spotlight pic.twitter.com/eP6Ps4i9M5

Livingston continued a productive game in the fourth quarter, showcasing his smooth shooting stroke as well as his post game. Livingston, who came into the contest averaging a team high 32.2 points per game, was once again the leader of WRA’s offense.

Chris Livingston sizes up his man, and finishes with a beautiful stepback jumper 🎥⬇️ pic.twitter.com/JxuFw06Z4X

Despite the stellar effort, star-studded International Sports Academy closed out the contest late. Bediako and company grew their lead back to double digits, as they would take care of a pesky Western Reserve Academy, 72-61.

Barba hits Bediako on an alley-oop, as ISA is pulling away here in the fourth quarter. @isa_basketball pic.twitter.com/T7WHIVNgqD

Both of these schools have bright futures ahead, as they continue to draw in nationally recognized talent to play for their respective basketball teams. ISA will host Aspire Academy on Friday, while WRA is next in action Saturday afternoon when they visit University School.