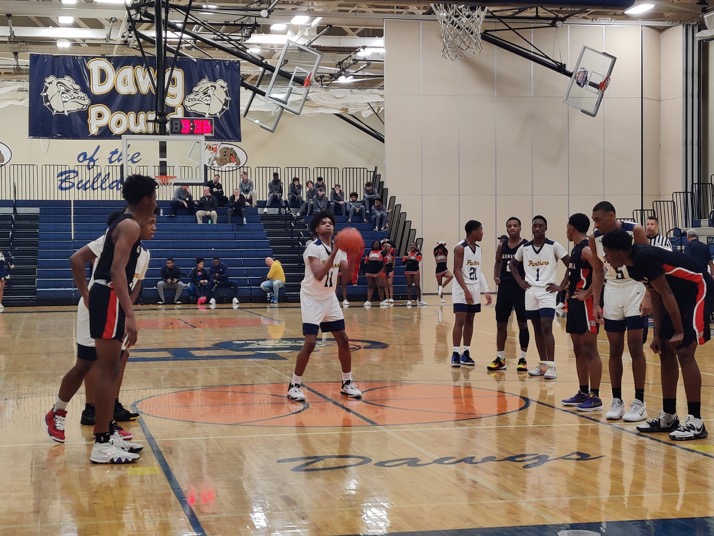 With 8.7 second left in the game, Euclid Panthers guard Steven Key made two free-throws to tie the score 81-81. But the Panthers left Glenville too much time on the clock as the Tarblooders went down the court and with a couple key passes, 6’9” Senior Tyshune Bender had the ball under the rim and made the game-winning layup at the end of regulation.

The basket gave Glenville the 83-81 win over Euclid in the NEO Youth Elite Christmas Classic at Garfield Heights High School.

“Coming down the floor, me and Lorenzo (Nettles) made eye contact,” Bender describes the game-winning score.

“I knew he was driving, so I had to set myself up, so I can turn around and get the bucket. I should have dunked it, but we got the (win).”

Euclid came in that fourth quarter and clawed their way back to take the lead for the first time since the second quarter with a basket from Clayton Cunningham. It took the Panthers almost two quarters to take the lead from Glenville.

Tarblooders’ head coach Michael Holt preached to his players not to panic, and to relax.

“Basketball is a game of runs,” Holt said after the game.

They make their runs, we make our runs. Fortunately we made better runs.”

In the first quarter Key scored nine-points for the Panthers to help give them the early head start. He also made the last shot of the quarter to retake the lead.

Glenville came out the third quarter on fire as they went on a 15-3 run to make the score 58-43. Euclid bounced back with a 13-3 run of their own to give the Tarblooders a 56-61 lead heading into the fourth quarter.

The Glenville win over Euclid marks the second time since 2008 that the Tarblooders defeated the Panthers. (last victory was 2016).

Glenville their first close victory of the season as they lost multiple close games earlier in the season and Holt showed his excitement after the game.

“We’ve been in some really close games and we weren’t able to finish. It started with Lutheran East when we lost by two in the last five seconds of the game.”

For Euclid, they started the season off 3-0, but after this loss and their recent loss to Elyria marks a two-game losing streak for the Panthers.

Leading the scoring for Glenville was Bryon Ottrix Jr., who finished with 34 points. All but two of those points came in the first three quarters. He was given the game’s most valuable player award.

Caleb Bolten had 13 and Bender had 11 points with the game winner included for Glenville.

Key led the scoring for the Panthers with 33 points.