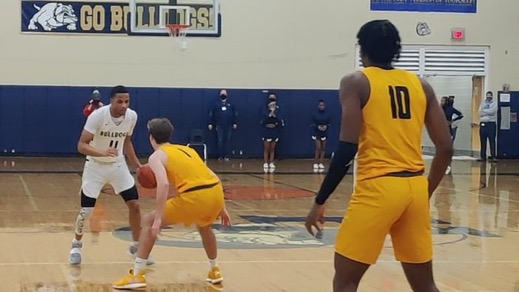 Garfield Heights forced Cleveland Heights’ turnovers as the Tigers had to go the length of the court to send the game into overtime as they trailed 66-63 with 4.5 seconds left.

In a fitting way, Bulldogs guard Marco Vazquez stole the ball to seal the 66-63 victory over Cleveland Heights and make it their fifth straight victory.

“We’re on a five-game winning streak right now. We started off 0-3. I think a lot of that is the fact that we were off for two months and played some tough opponents, including [at] Cleveland Heights, and Lorain (at home)… I think that we are getting our feel up under us. I think we are realizing what we do well and I think we got a shot to make a nice run in the tournament.”

Senior Bulldog Makail Cottingham was clutch in the fourth quarter from the free-throw line by making 9/10 free-throws. Four of which came from a foul and technical foul that gave Garfield Heights (5-3, 4-3 in Lake Erie League) four free-throws and the ball back with a 58-57 lead with around 3:00 left.

“It was huge [for us,]” Johnson describes the impact of the technical free-throw.

“We were at for two free-throws anyway and I think it changed the momentum as well.”

Johnson also spoke highly of the team’s attitude in the tense final moments of the game.

We also went small-ball. As you could see, we had five guards on the floor and I think we spread them out.”

Garfield Heights amped the pressure on the Tigers’ offense by forcing 22 Cleveland Heights’ (5-9, 2-4 in LEL) turnovers.

“The pressure. That is what we pride ourselves on defense,” Johnson said.

“Sometimes on offense, we have a tough time scoring at times, but our pressure is our main thing. We are a defensive team. I think that is the key to getting wins.”

Leading the Bulldogs in steals was Cottingham (3) and was also given the responsibility to defend Tigers’ star guard E.J. Farmer.

Farmer had 11 points in the first quarter. In the second quarter, Farmer was held to zero.

“(Farmer) is a good matchup for Makail (Cottingham),” Johnson said.

“They are both about 6’3.” Makail (Cottingham) competes at a high level. You can see he was outstanding today. (Cottingham) had 20 points and guarded E.J. (Farmer) the whole game, which was really impressive.”

Right behind Cottingham was Vazquez, who finished with 19 points. He was the scoring engine for the Bulldogs in the first half with 15 points with recruiters from Notre Dame College and Lakeland University observing from the socially distanced stands.

Sonny Johnson Jr. did not play in their loss to Cleveland Heights earlier in the season. He finished with six points and a highlight play in the fourth quarter to take the lead in a back-and-forth fourth quarter.

Here is the official scorebook for Garfield Heights’ 66-63 win over Cleveland Heights. pic.twitter.com/4kxGrc8Q4q

Both teams will play their next games on Friday, Jan. 29 as Garfield Heights will host Shaker Heights and Cleveland Heights will face Maple Heights on the road.