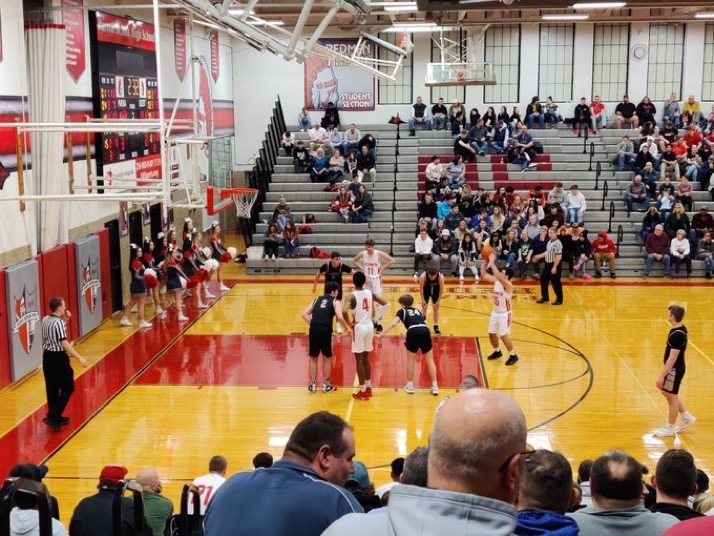 PARMA, OHIO – The Fairview Warriors’ leading scorer Luke Howes was given the ball to make it a potential 8-point lead over the undefeated Parma Redmen with less than a minute remaining in the fourth quarter.

He missed the first free-throw, making it a live ball. As one of the Redmen grabbed the rebound under the rim, Howes stole it and laid the ball in to give the Warriors the 8-point lead to lead them to a 60-52 win over the Redmen.

“I went to the free-throw line. I felt it come up short and once it hit the front rim, I grabbed it and put it in],” Howes said.

“It was definitely a big momentum shifter, because it could have given them an extra possession. Instead, it gave us two points.”

But the play may not have happened had Fairview’s exploitation of the in-bounds rules wasn’t executed to perfection.

With :32 seconds remaining in the fourth quarter, the inbounder, Marty Rehor threw the ball to Ethan McQuate, but both of his feet were out of bounds on the baseline, thus transitioning the inbounder to him and was eligible to inbound it to his teammate, leading to Howes doing to the line as Parma fans screamed for a turnover.

“On [made shots], you can run the whole baseline [on the inbound],” Warriors’ coach Ryan Barry said.

“As long as the ball doesn’t come across the baseline, you can throw it back-and-forth all you want. As well as run the baseline.”

“To be honest, I did not know that was going to work like that,..” He said.

“I guess if it’s gonna give teams problems knowing if it’s legal or not. It’s great for us.”

Howes led the team with 23 points and is averaging 23.3 PPG.

(7-1, 4-0) Fairview’s win over (8-1) Parma gives them the slim edge they needed to be first place in the Great Lakes Conference, but coach Barry has bigger goals than a conference championship.

“We keep getting these things on Twitter. Rankings of this and that. It’s cool for the kids, but the only rankings we care about is the end of the year.”

To start the game, Parma scored the first 6 points of the game, but the lead didn’t faze coach Barry and his players as they managed to tie it 31-31 at halftime.

Howes had 13 points in the first half, but the real star that half was Redmen’s Brayden Humbel who made four three-pointers and totaled 14 points.

In the second half, Humbel scored two points and coach Barry believes Fairview’s pace of play cooled the hot hand.

“I think his legs got tired,” coach Barry said about Humbel’s second half performance.

“It’s not easy. He shot really well, but it’s easier to come out and shoot in the first half and knock them down. But, to play our tempo and out pace for four quarters and try to make them the second half gets a little too much for some people.”

Fairview’s third quarter gave them a 6-point lead heading into the fourth quarter. Noah Mesarios (8 points) and Howes (6 points) scored all but two of their third quarter points.

The third quarter included an 8-2 Warriors’ run while the score was tied 39-39 near the end of the quarter.

Fairview’s next matchup is at Normandy on Jan. 7 and Parma looks to bounce back as they host Holy Name.