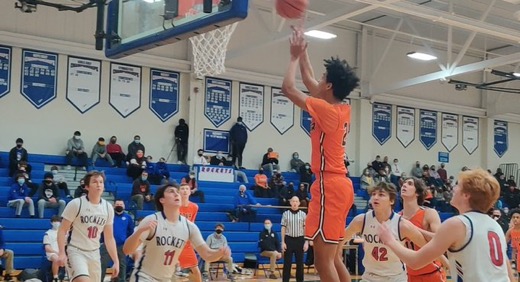 The difference between winning and losing can be something as simple as who wants it more and will make the hustle plays to make it possible.

The hustle of the 11th seed Padua Franciscan Bruins was in full force to upset fourth seed Bay Village 69-54 to advance to the Division II, Northeast 4 District semi-final.

“I’m proud of my guys; my coaches. We just have to keep believing and defense has been our calling card the whole year. We have been stressing it and we really have been showing it for the past few games.”

“Our main focus was to slow down (Ashton Price),” Senior David Rice said.

It was a group effort across the board, but leading the way was Rice, who led the team with 24 points and 10 rebounds.

Rice scores from the offensive rebound.

(Rice) has been our leader all year in terms of scoring,” Ansberry said.

“And he started to do the little things. I’m so happy that he is having success and our team is having success. He’s an outstanding kid. He leads by example. I’m glad to see all the hard work is paying off.”

He was also very efficient from the field shooting 66 percent and 60 percent from the three-point line.

Second in rebounds on the night was the 6-foot-7-inch Sophomore Jesse Hayes, who had nine rebounds, five of which came from the offensive side to help the Bruins secure a 40-20 rebounding advantage over the Rockets.

“He is young. He works hard. And he comes out there and leads by example. He was very active today and when he is active. He can be really scary as a player… He was the biggest guy on the floor and he played like it tonight.”

Coming off the bench was Jason Freeman, their sixth man that brought the energy by making plays on loose balls and playing tough defense.

“Jason (Freeman) comes out and he hustles, he gets to the rim,” Ansberry said.

Rice echoes the intensity Freeman brings to the court.

“He brings the intensity… Even when he’s out there, he’s really a starter.”

The intensity the Bruins brought led to big runs in each quarter. There was an 8-0 run in the first and fourth quarters, a 17-2 in the second.

Bay Village’s season finishes with a 15-4 record and a Great Lakes Conference crown with a 13-2 record.

On Thurday, Mar. 4, Padua Franciscan will go on the road to take on seventh seed Revere, a familiar opponent.

“We played them about three weeks ago at their place. We were lucky enough to get a (60-53) win. They are well-coached… I am not surprised that they are there. I’m looking forward for the match and it’s going to be a dog fight.”