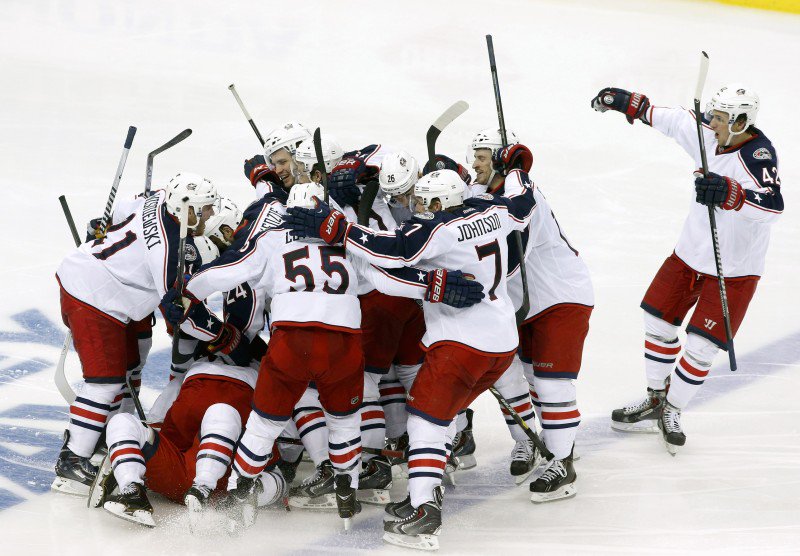 Sidney Crosby had his NHL-best 23rd goal at 2:39 of the first period to give Pittsburgh a 1-0 lead. Crosby’s opening goal initially took a little life out of the CBJ fans in Nationwide Arena, but it was Hartnell and the boys to the rescue, reviving the stadium in what would go on to be a monster win for the Jackets.

Crosby’s opening period goal would be the only time Pittsburg would find the net all night. Early in the first period, nerves seemed to get the best of Columbus, but those shaky hands would settle quickly.

“We were really nervous, and we talked about it in between the periods, we talked about how we’ve been playing in this league and that’s when I thought they took a great step mentally,” Tortorella said.

Those nervous butterfly’s flew away in a hurry when Nick Foligno dropped off a perfect pass to Cam Atkinson who snapped it home to tie the game at one, midway through the first period. Atkinson now has scored a point in his last 8 games, a career points streak.

From the second period on, the CBJ would once again take one the NHL’s best teams out back to the wood shed.

William Karlsson would start the barrage of goals at 10:15 in the second period. Sam Gagner dealt the puck to Karlsson, who found the net on a backhand shot.

Two minutes later, Scott Hartnell found himself on a breakaway only to beat Penguins goalie Matt Murray with a nice backhanded shot. Hartnell’s first goal would be unassisted.

The second period came to a close with the Jackets up 3-1. This lead was nice, but it wasn’t enough for the Jackets to rest easy.

The CBJ came onto the ice in the third period with a killer mentality. They wanted to seal the deal and put the game out of reach, and that’s exactly what they did.

Scott Hartnell started the third right where he left off in the second, finding the back of the net. Hartnell grabbed a Gagner rebound and whipped the puck passed Murray for his second lamp lighting of the night.

But wait, there’s more. 17 seconds later, Brandon Saad would make his mark, scoring his 12th goal of the season. Alexander Wennberg sent a pass across the slot to find an open Saad, who easily buried the shot to put the Jackets up 5-1.

The team still obviously didn’t feel comfortable with a 5-1 lead in the third, so 31 seconds later Boone Jenner decided to extend it a little more. Jenner drove in and fired a laser passed Murray to pad the lead. Brandon Dubinsky assisted on the shot.

Three goals in 51 seconds….can’t beat that.

The CBJ would give the Penguins a few minutes to put their head back on straight. Okay, few minutes is up.. Three minutes later, at the 6:24 mark of the third, Scott Hartnell would put the cherry on top of a big game. He would score the Jackets seventh goal of the game, giving himself his 9th career hat trick.

It was a magical night in Nationwide Arena.

Here are full highlights from the win:

“Goals have been few and far between for myself for the last 15 or 20 games, so it’s nice to contribute,” Hartnell said. “Everyone had smiles on their faces tonight, everyone is contributing and when you beat the Pens, the smile is extra big.”

Nationwide Arena was as electric as it has ever been and attendance was at a season high. This one really had that playoff hockey feeling. Let’s only hope the CBJ play like this when the actually playoffs arrive.

The CBJ improve to 22-5-4 and now sit atop the NHL in a tie for first, with 48 points. The team is currently riding a 13 point streak.

The CBJ are back in action Friday night to take on the Montreal Canadians at Nationwide Arena. This will be the second time the CBJ take on Montreal, the first a 10-0 rout win for the CBJ.