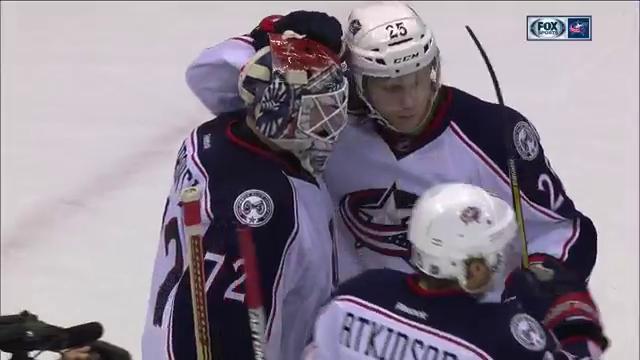 The CBJ made the trip up north Friday night to take on the Detroit Red Wings at Joe Louis Arena and came away with a 4-1 victory to extend their win-streak to five games.

Oh how the tables have turned this season for the Jackets/Red Wings rivalry.

The Red Wings, who some consider to be the Jackets Big brother, have made 25 consecutive playoff appearances, but have started out the season struggling.

The CBJ however, are off to a franchise record start to any season. It was needless to say that the team really wanted to send a message to Detroit, and that message was pretty clear: Little brother is growing up, and fast.

The Jackets started the night off in a hurry when  Cam Atkinson’s shorthanded a goal at 3:08 of the first period. Atkinson snatched up a loose puck and started a 2 on 1 before burying the shot.

The Red Wings had two shots near the end of the first attempting to tie the game. Both managed to hit the bar, but couldn’t find the net.

Detroit did however manage to tie it up at the 4:46 mark in the second. Dylan Larkin’s power-play goal made it 1-1. This goal was the extent of the Red Wings offense for the night.

The Blue Jackets offensive however, was a different story, it continued to run like a well oiled machine.

Before the game, John Tortorella said he wanted his guys to continue to show discipline on the ice and play with a higher level of intensity tonight. His game plan was heard loud and clear.

Columbus made it 2-1 at 8:34 of the second period when David Savard intercepted a pass and found Brandon Dubinsky open to score his third goal of the season.

The CBJ went on to increase the lead minutes later, when another Mrazek mishap turned into  Lukas Sedlak’s first goal career goal. Sedlak tapped in Sam Gagner’s rebound to make it 3-1.

Gagner would go on to cap the game off, scoring an empty net goal with seconds to go in the fourth period. Gagner’s goal made the final score CBJ 4 Detroit 1

Bobrovsky was lights out once again under heavy fire, racking in 32 saves. Although the Red Wings spent a lot of time in the Blue Jackets end, they just couldn’t beat him.

The puck is continuing to roll the Blue Jackets way. This game makes the CBJ 5-0-1 in the last 6 games and 16-5-4 on the season. This win gives the Jackets 36 points through 24 games, the second best points percentage in the NHL.

The boys in union blue continue to be one of the most surprising stories in the NHL. Many were unsure of the legitimacy of the team’s talent early on in the season, but after 24 games it’s just about safe to say that Columbus has a real shot at some playoff hockey on our hands.

Some experts are even giving the CBJ the best odds to win it all…. but I won’t get ahead of myself.

For now, we’ll focus on getting passed the New York Islanders Saturday night, back home at Nationwide Arena.