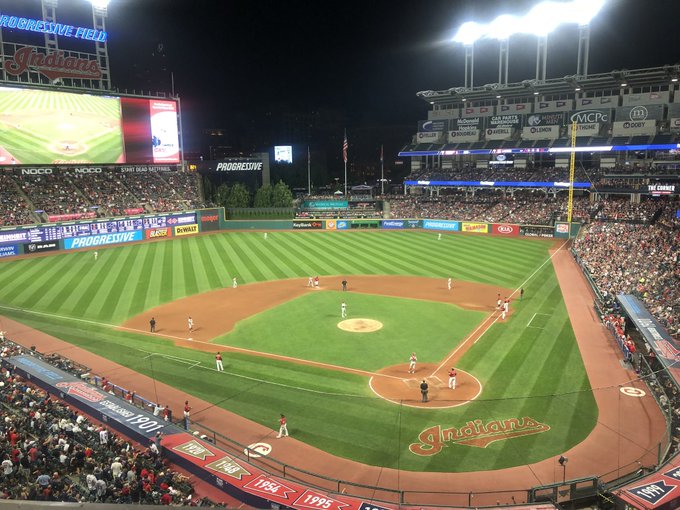 The victory assures that the Indians would stay at worst tied with the Tampa Bay Rays for the final wild card spot in the American League.

Tampa rallied from down 2-0 to eventually do just enough to top the Boston Red Sox 5-4 in St.Pete on Friday night in 11 innings.

It’s the 91st win of the season for the Tribe, not bad for a team that has been as beat up in both their starting rotation and everyday lineup than just about any team in the Majors this season.

Here’s a look at how things went down Friday night at Progressive Field on a perfect evening for September baseball.

Indians starter Shane Bieber has had some up and down games as of late, but Friday against the Phillies looked a lot more like the All-Star game MVP than the guy that has at times it seemed was worn down and a bit off his game.

Bieber threw 101 pitches, and with his effort his ERA now stands at 3.23. With Bieber and Clevinger and the development as of late from Aaron Civale, the Indians could be a dangerous team IF they can find a way to get into the playoffs and win that one-game wild card game.

2. Not a Dry Eye in the Stadium

It was hard to hold back the emotions when Indians pitcher Carlos Carrasco came into the game, getting the final four outs to earn the save for the Indians in the 5-2 win.

Some have wondered if the team pushed Carrasco too hard to get back, but the Indians pitcher who was suffering from leukemia earlier this season looked sharp in the four-out effort on Friday.

Carrasco did walk a batter, but in the 17 pitches (12 were strikes) he looked like the old Carrasco, and was able to get the outs needed to get the save and close out what was a great night for Indians fans.

With Bieber looking solid on the mound the Indians built a 4-0 lead, and after the Phillies made it interesting in getting it to 4-2, they tacked on an important insurance run in the seventh to push the lead to three runs.

The stars on offense included Oscar Mercado who went 2-for-4 with two runs batted in, a double in the first to score Frankie Lindor and a huge two-out single in the seventh to make it 5-2.

Carlos Santana was the only other Indian to have two hits on the night, and the other runs batted in went to Lindor, Santana, Yasiel Puig and Franmil Reyes.

You give the starters five runs it usually means good things, and that was again the case Friday night.

Indians Move Into Tie with Rays for Second AL Wild Card Spot Following 7-0 Shutout of Detroit
Does the Indians Need Brad Hand to Close Out the Season?