Battle of the Saints turns into a Classic, St. Ignatius defeats St. Edward 17-10 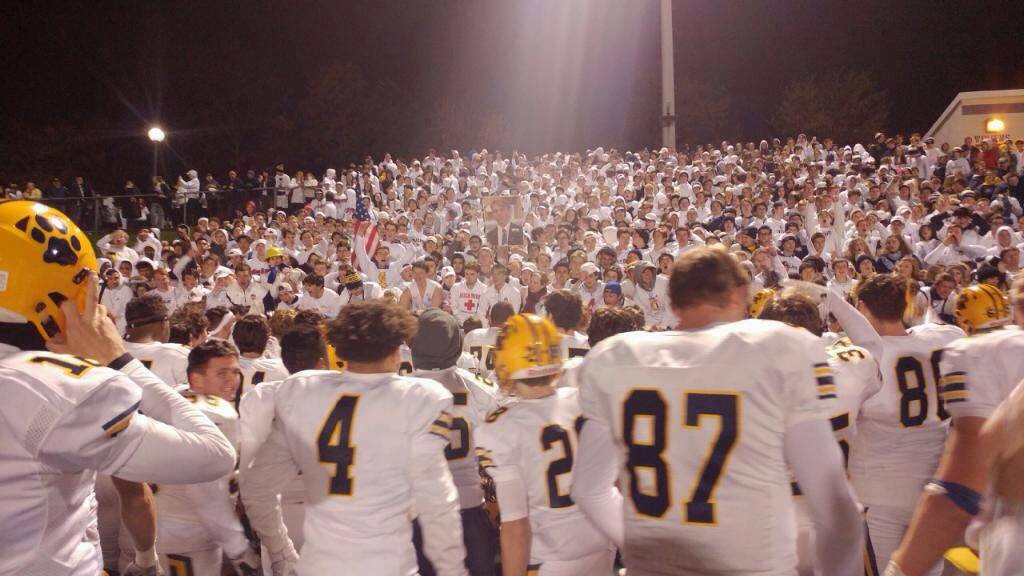 ***Saturday Night’s game between the St. Edward Eagles and the St. Ignatius Wildcats is sponsored by YUZU Lakewood. YUZU Lakewood is located at 13603 Madison Ave. Lakewood, OH. You can also contact YUZU Lakewood at (440) 799-8343.

LAKEWOOD, Ohio – On Saturday night, First Federal Lakewood Stadium saw the Battle of the Saints take place. St. Edward faced St. Ignatius to close out week 10 of the regular season. Heading into the game the St. Edward Eagles were 9-0, while the St. Ignatius Wildcats were 8-1.

In the first quarter, both teams were going back and forth until the Wildcats got on the board first with 7:15 in the quarter when Jahadge Floyd scored on a 6-yard TD run. Floyd’s touchdown was the only scoring play in the opening quarter as the Wildcats took a 7-0 lead into the second quarter. The Eagles trailed 7-0, which marked the 3rd time this season that St. Edward trailed after the first quarter. Prior to this game, the Eagles were 2-0 after trailing in the first quarter.

In the second quarter, the Wildcats added on with a 24-yard field goal from Matthew Trickett with 9:24 in the first half giving St. Ignatius an early 10-0 lead. The second quarter saw 3 turnovers. The Wildcats had Cameron Toppin get an interception but shortly after St. Ignatius committed a turnover also when Richard White intercepted a Wildcat pass from Daniel Alexander. Garrett Dzuro hit a string of bad luck though when he threw two interceptions in back to back drives.

The Wildcats took a 10-0 lead into halftime though over the Eagles. St. Ignatius crossed midfield 2-4 times when the Wildcats didn’t cross midfield the team threw an interception and also had time expire while heading into halftime. On the other hand, the Eagles crossed midfield 4-4 times but in two of those drives committed a turnover, proving that turnovers were very costly early on.

To start the second half, The Wildcats started with the ball but only had the ball for 1:31 before being forced to punt. The Eagles couldn’t capitalize though as they went 3 and out but had a big 50-yard punt from Mason Lawler. The Eagles had another turnover in the 3rd quarter when the ball was snapped over Dzuro’s head and the ball was recovered by the Wildcats with 4:24 in the quarter. The very next drive though, the Eagles forced the Wildcats to commit a turnover of their own when White had his 2nd interception of the game (3rd of the season). The Eagles had one of their biggest plays of the game when Devin Maddox had a 39-yard run with 2:24 remaining in the 3rd.

Maddox’s run eventually set up the Eagles first scoring play in the 4th quarter when Blaine Stencil had a 32-yard field goal with 11:50 in the quarter. The Eagles went for an onside kick following the field goal and the kick was recovered by Daylan Jernigan. On that drive, the Eagles put together an 8 play, 50-yard drive that lead to Tylan Rice having a game-tying 4-yard TD run with 9:05 left. Teon Smith had a big sack with 4:01 left that knocked St. Ignatius out of field goal range but the Eagles could not capitalize on the following drive.

The Wildcat defense only allowed the Eagles to make 3 plays and total all of 2 yards. Momentum went back the Wildcats way and St. Ignatius only needed 4 plays before Alexander scored on a 2-yard run TD with 1:13 left giving the Wildcats a 17-10 lead following a Trickett extra point. The Eagles had enough time to put together one more drive but eventually turned the ball over on downs.

“We moved the ball in the first half but we gave them the first one when we had the turnover on the punt. That kind of ended up being the difference in the game. We had a lot of injuries, we were down to guys we didn’t usually use…we even had a JV player in there. We had Michael Dowell in there and he hasn’t played receiver all year. That’s no excuse though, it’s apart of football. The kids fought, both teams, and it was a good game. I told the kids no matter what the outcome is what matters the most is week 11, because if you lose then you go home.”

“The defense really came along after the first couple of series, the defense did a great job. The Wildcats are big and physical, there is no doubt about it.”

“A lot of kids realize you can get there. Hard work, you can get there. You gotta keep your faith and I think that’s the big thing. They saw how close we were to getting it last year. So was it a motivation for the offseason? Definitely, definitely. But right now it’s one game at a time. You can’t think about last year right now.”

Omar Fattah commented on his defensive performance and what he takes away from the loss:

“We just got to keep set of the big picture. You want a week 15 and you want to be state champs. This is always a great game, it’s a great rivalry, great opponents to face and always a fun game every year. We have great support from our fans and family, we have people all walks of life that come to this game and it’s all love in the end. We are going to stay hungry, we are going to get after it and keep focused. We are going to keep getting better week by week. I’m proud of every one of my teammates, we all make mistakes but we are going to fix them. You are going to see us week 15.”

Jahadge Floyd commented on his first-half performance and reading the Eagles defense:

“This was the biggest half of my year so far. The atmosphere was unlike any other. I haven’t played a game like this yet. It’s Week 10, so that’s the good payoff atmosphere to get us ready for the playoffs. The Eagles defense comes really hard. So when they come so hard, there’s gonna be space left. I just read the whole play and hit the space.”

Eagles Player of the Game:

Wildcats Player of the Game: