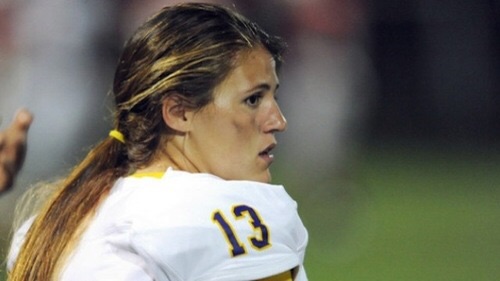 KENT, Ohio – Not even the rain could dampen the spirits at Dix Stadium on the campus of Kent State University on Saturday evening.

The crowd who attended the game were witnesses to school history in the 45-13 win over Delaware State.

The Golden Flashes become the second team to have a woman score a point in a division one college football game.

At the 4:18 mark of the second quarter following a five yard touchdown run by George Bollas, the moment came as fifth year senior April Goss entered the game to attempt the extra point.

Goss connected on the attempt and mobbed by her teammates.

“I knew this was a possibility tonight,” Goss said at the team press conference after the victory.

“I’ve been waiting for this moment for an awfully long time. I felt like I blacked out a little bit when I kicked it. It wasn’t the cleanest hit…but it went through, and that’s all that matters.”

Goss is from the Pittsburgh suburb of Aliquippa, Pennsylvania and played high school football at Hopewell high school. Goss dreamed of kicking a field goal in a division one college football game.

Head coach Paul Haynes made the decision to make her dream come true in the Golden Flashes’ home opener.

“April deserved it,” Haynes said. “She is the first player out there every day at practice and the last one to leave. She didn’t get this because she is a female. It’s because she has worked hard. Everyone on the sideline was excited for her.”

Goss wears number 91 for Kent State. Goss joins Ashley Martin of Jacksonville State as the only females to score a point in a division one college football game. Martin accomplished her feat on August 30, 2001.

Kent State is 1-1 on the season. The Golden Flashes travel to Minnesota to face the Golden Gophers on September 19.