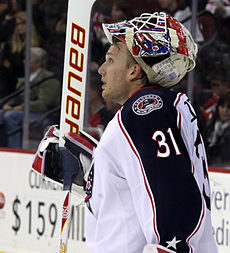 With starting goaltender Sergei Bobrovsky out due to illness, Anton Forsberg will be getting the start tonight against the Carolina Hurricanes. This news comes just one day after Forsberg got recalled by Columbus after they cut backup netminder Curtis McElhinney earlier in the day.

Forsberg was a vital part of the Lake Erie Monsters’ success in winning the Calder Cup last year and has carried over that success into this season, where he has a 12-6 record and an average of 2.16 goals allowed per game in twenty-one games played in this year for Cleveland.

One of Columbus’ other prospects and the other staple of Cleveland’s goaltending unit Joonas Korpisalo has also made the move to Columbus for tonight’s game, where he will back up Forsberg. It is unknown how long Korpisalo will stay in Columbus, but the thought process is that he would be sent back down to Cleveland after the game tonight to anchor the goaltending unit.