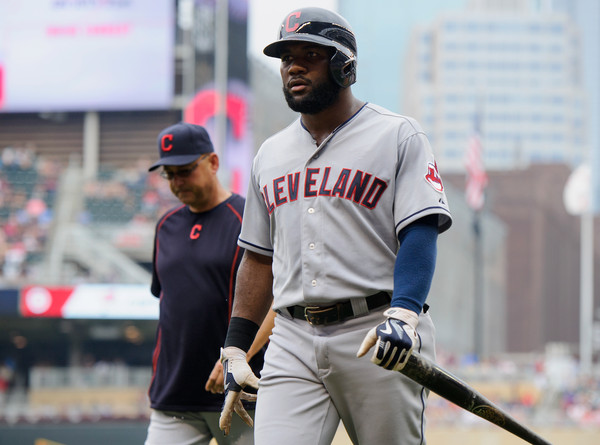 Cleveland– The Indians topped the Houston Astros 4-3 on Thursday to get the series win; but if it hadn’t been for a defensive play in the first inning, the win may have never happened.

The Astros started off the evening strong. After Josh Reddick recorded a double, Norichika Aoki followed that up with a single. After Corey Kluber walked Brian McCann, bases were loaded with one out.

Kluber struck out Evan Gattis before Yuli Gurriel stepped up to the plate. On the 3-2 pitch he hit a bomb to right field that looked like it would score at least two runs.

That is, until Abraham Almonte saved the inning with a catch after running into the right field wall.

Instead of two, possibly three runs scoring, the Indians held the Astros scoreless in the first inning. Following the win, pretty much everyone was in agreement that the catch saved the game for the Tribe.

“If he doesn’t catch that ball, it’s probably three runs. That’s a lot to dig out from early on,” Indians manager Terry Francona said.

“Obviously if we’re down two, or 3-0 after that, it changes things a lot. So you could argue that was probably one of the bigger plays of the game,” Kluber said.

Astros manager A.J. Hinch would go on to challenge the play, as he thought Almonte may have trapped the ball against the wall when making the catch. After the review, however, the original call stood.

“I know they confirmed it, and the change of direction was inside of his glove, but we missed out on that one. It could have changed the whole complexion of the game,” Hinch said.

On top of making that stellar play, Almonte was active at the plate as well. He ended an 0-10 skid in the fifth inning when he hit his first home run of the year in the leadoff spot, bringing the Indians to within one run, and paving the way for Francisco Lindor’s go-ahead homer in the seventh.

The Tribe is back in action at home tomorrow against the Seattle Mariners. First pitch is scheduled for 7:10 p.m.

Indians Take 2 of 3 From Astros with a 4-3 Win; Three Takeaways From the Victory
Five Notes on the Indians’ Series Win against Houston