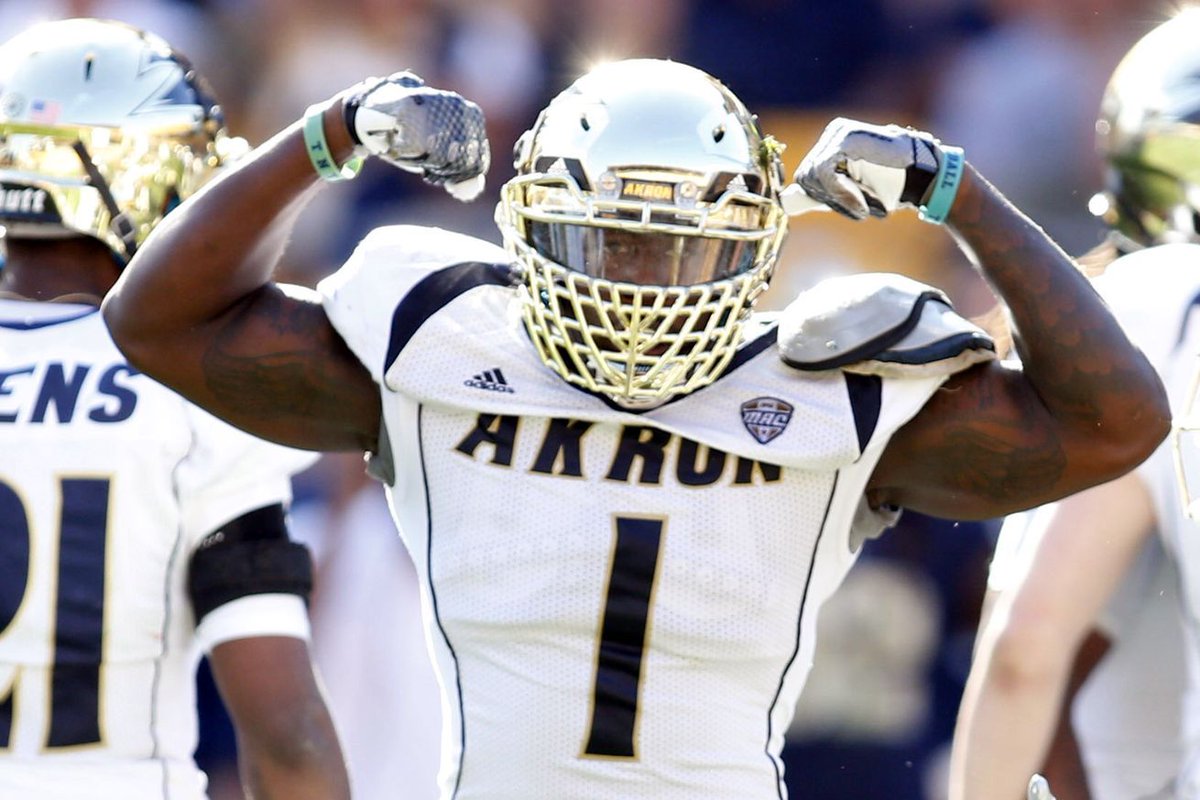 AKRON, OHIO – MACtion was on full display Tuesday night in Akron, Ohio when the Akron Zips hosted the Ohio Bobcats in a pivotal MAC East showdown, pulled out by the Zips 37-34.

The Bobcats got off to a quick start as Sophomore Quarterback Nathan Rourke rushed for a 68 yard Touchdown on Ohio’s second offensive play.

Akron scored the next 10 points in the ballgame as true Freshman Quarterback Kato Nelson found his footing in just his second career start. Nelson finished the first quarter with 67 yards and another 25 on the ground.

The first quarter was highlighted by a trick play touchdown by Ohio, when Rourke walked up to the line of scrimmage as if he was barking out signals, next thing you know the ball was directly snapped to running back AJ Ouellette who flipped it Brendan Cope, Cope then tossed the ball to a wide open Nathan Rourke for a touchdown.

Cope actually finished the first quarter with more passing yards than Rourke, but the Bobcats still held a 14-10.

Ohio started the second quarter by blocking an Akron punt and quickly capitalizing with a Dorian Brown 5-yard touchdown. Bobcat fans had to feel pretty confident at this point with a 21-10, little did they know that Nelson’s night was just beginning.

The Akron offense began seizing the momentum on the next series, starting with a 71-yard touchdown pass to a wide open Kwadarrius Smith, and when Ohio fumbled on the ensuing kickoff the Zips started to believe they could win this game.

Akron again capitalized on a Ohio mistake when Nelson hit Austin Wolf on a 25-yard pass, taking a 24-21 lead.

Ohio would tie the game at 24 before Akron regained a 30-24 Halftime lead. The Zips relied on big plays and Ohio mistakes to set up scoring opportunities and then Nelson did the rest. As Nelson tossed 4 touchdowns for 268 yards in the first half.

After combining for 54 points in the first half both Akron and Ohio struggled to get into the same offensive rhythm early on in the second half. Ohio did cut into the Akron lead when kicker Louie Zervos nailed a 46 yard field goal, and just like that the Zips only held a three point lead heading into the fourth quarter.

A lot was on the line when the fourth quarter began, specifically MAC East title implications, as Ohio would earn the right to play for the MAC championship, but if Akron won they would control their own destiny and just have to beat Kent State on Tuesday for the opportunity to play in Detroit for the MAC title.

Ohio started with the ball and appeared to be driving down the field to at least tie the game, when again the Bobcats made another mistake, as Rourke threw his second interception of the night. Rourke clearly knew his pass was off the mark because he immediately began running after Akron defender Jordan George.

The Bobcat sideline appeared to be defeated following the pick, especially once Akron scored 5 plays later on an 8 yard rush by running back Manny Rush.

With just under 12 minutes left the Akron lead was 10 points, but Ohio kept fighting as they used a 5 minute drive to cut the lead back to 3 with just under 6 minutes to play.

The two teams traded drives the rest of the way as Akron was able to hang on and take control of the Eastern division . After the game when asked if Akron beat them tonight or if they beat themselves Ohio strong safety Javon Hagan “ We definitely beat ourselves, they are not the better team.”

In college football a lot of games come down to two things 1) limiting your mistakes 2) capitalizing on your opponent’s mistakes. When you look at why the Zips won the game the first stat you have to look at is the 21 points they scored off the three Bobcat turnovers.

While Akron was able to capitalize off of Ohio’s mistakes, Ohio on the other hand as they did not force any turnovers, in the 3 games the Bobcats have lost they are negative six in the turnover ratio.

Akron did have 16 penalties for 167 yards, two of which were targeting calls resulting in the Zips losing two defensive starters, but still the Bobcats were unable to make the Zips play for their mistakes.

Akron now holds the tiebreaker over Ohio as both teams sit at 5-2 in the MAC with one game remaining, Akron hosts Kent State next Tuesday night while Ohio travels to Buffalo for a Black Friday matchup with the Bulls. With a victory against rival Kent State the Zips will represent the MAC East in Detroit, and with an Akron loss Ohio can still win the MAC East with a road victory.